THE REAL GREENHOUSE EFFECT
The real Greenhouse effect is the cooling of the earth's surface by the atmosphere in the same way as in a greenhouse. The atmosphere is held in place by gravity, so that the top of the troposphere performs the same function as the glass ceiling of a greenhouse. It  removes heat  by contact with the earth that has been heated by absorbed radiation from the sun and has risen to be replaced by cooler air. This process is called convection.

In a greenhouse,  the heated air  cannot  mix with the entire atmosphere, and is therefore warmer. .

There are two items representing heat loss from the earth.

Latent Heat is the easiest to calculate, from the total annual precipitation. TK97 chose 78 W/msq which is less than any of the other calculations listed (80.2. 82.3 and 85.1 W/msq)

The other item , called  :Sensible Heat" in their tables and "Thermals" in the graphs, is the heat loss from the real greenhouse effect.

TK97  chose 24 W/msq for this quantity although the other authorities have much smaller values (15.3, 15.3 ans 18.8 W/msq). There is a suspicion that they needed the extra in order to "balance" the budget.

TFK09 chose  17 W/msq for "Sensible Heat, where other authorities had found 15.6. 19.4 and 17 W/msq They had evidently abandoned all hope of "balancing" their budget, and they came out  with a surplus of 0.9 W/msq which so horrified Trenberth that he famously called it a "travesty" in his Climategate email.

Both papers give separate estimates are  for "Land" and "Ocean"

There is evidently much greater heat loss to the atmosphere over land than ocean. This is because of the greater turbulence caused by the irregular surface profile.

The difference is slightly greater because of the lower albedo over land which gives a lower solar absorption.

They therefore now consider that there is a difference of 6.1% between the albedo of "Land" and "Ocean"

It should be noted that the claimed global warming from the fake greenhouse effect (the absorption of infra red radiation by trace gases) is claimed to be a mere 1.6 W/msq since 1700. Changes in the real greenhouse effect could easily amount to more than this but the uncertainties involved in calculating its actual amount make it difficult to estimate..

Changes in the real greenhouse effect could include a number of natural  climate changes in the earth's orbit,  sun, ocean circulation and volcanic eruptions

The amount of heat lost by the real greenhouse effect would also be reduced by  anthropogenic efforts to reduce convection, so these effort should be considered as contributions to "global warming":if any such warming is detected

A greenhouse, by preventing natural convection, reduces its extent. .There are many other ways that humans try to stop the natural convection process. All buildings act in the same fashion as a greenhouse. Shelter belts and wind barriers reduce heat loss. .Changes in albedo which reduce the surface from darker to lighter also are  warming devices. Forests have a higher albedo than farmland, concrete roads and airport runways.

Devices that capture part of the natural heat loss such as windmills or solar panels do not reduce natural greenhouse cooling but merely capture it before it leaves.

It is surprising that the real greenhouse effect has never been examined as a possible reason for changes in the earth's surface temperature. Some of its effects may be summarized as urbanisation and land use change and they undoubtedly provide an upwards bias to temperature readings by weather stations; a bias that the compilers of the Mean Global Surface Temperature Anomaly Record resolutely refuse to take into account when they are claiming global temperature rises from the fake greenhouse effect

I have pointed out in my "Greenhouse Delusion" that the average  0.02 W/msq of heat which is generated by humans is very unevenly distributed and there are some industrial areas where the amount generated exceeds that attributed to the fake greenhouse effect by almost 100 times The attached graph (from Tom Quirk) shows how this heat is predominantly emitted between 30-60 degrees N 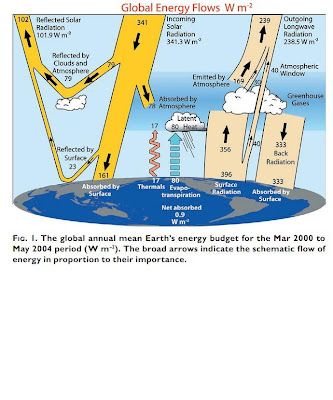