MARCH 15th 2011
THE TWO  GREENHOUSE EFFECTS
The greenhouse effect in many publications (including my own) is claimed to have been discovered in 1822  by Jean Baptiste Joseph Fourier (21 March 1768 – 16 May 1830) the French mathematician.

The Wikipedia article at http://en.wikipedia.org/wiki/Joseph_Fourier  shows that there are two different greenhouse effects, and that Fourier only discovered the first one.
Wikipedia says

"Proposal of the "greenhouse effect"
In the 1820s Fourier calculated that an object the size of the Earth and at its distance from the Sun should be considerably colder than the planet actually is if warmed only by the effects of incoming solar radiation. He examined various possible sources of the additional observed heat in articles published in 1824[7] and 1827.[8] While he ultimately suggested that interstellar radiation might be responsible for a large portion of the additional warmth, Fourier's consideration of the possibility that the Earth's atmosphere might act as an insulator of some kind is widely recognized as the first proposal of what is now known as the greenhouse effect theory.[9]

In his articles Fourier referred to an experiment by M de Saussure, who exposed a wooden box lined with black cork to sunlight. Three panes of glass were inserted into the cork an inch and a half apart. The temperature became more elevated in the more interior compartments of this device.[10][1]. The nature of this experiment and Fourier's conclusion that gases in the atmosphere could not form a stable barrier like the glass panes may have contributed to atmospheric warming later being known as the 'greenhouse' effect despite the actual mechanism of atmospheric warming being different than that found in an actual greenhouse.
This is the first "greenhouse effect" and arguably, the only genuine one.It can be attributed to Fourier, but the real discoverer was

"Horace-Bénédict de Saussure (February 17, 1740 – January 22, 1799)  who was a Swiss aristocrat, physicist and Alpine traveller, often considered the founder of alpinism, and considered to be the first person to build a successful solar oven."

It is clear from the above passages that Fourier's belief that the atmosphere warms the earth was based on the experiments of M de Sausure. These experiments simulated what happens in a greenhouse, where air heated by contact with warmed earth rises, is repaced by cooler air, until all the air in the greenhouse is warmer than the air outside it, where the entire atmosphere is available for subsequent mixing. Fourier obviously considered that, although the atmosphere outside the greenhouse would end up cooler than that inside it, nonetheless. it must have a warmimg effect on the earth.
The idea is not complete nonsense.The earth's atmosphere does resemble a greenhouse, because the atmosphere is held close to the earth by gravity. Instead of a glass window above it, the atmosphere has upper limits which provide the region which is heated by the greenhoiuse effect..

Attached is a diagram showing the temperature regions of the atmosphere. 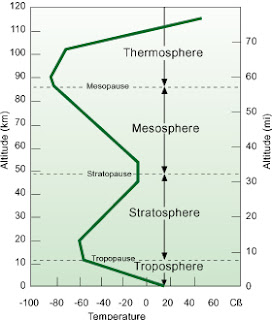 It is immediately obvious that the atmosphere cools the earth and does not warm it. It  removes heat from the surface of the earth. half ot which is radiated back to it.

The stratosphere provides heat which originates where the ultraviolet part of the sun's radiation reacts with oxygen and ozone.

There is a difference between day and night. At night there is no sun and the earth cools by radiation.  Because the atmosphere has been warmed the previous day it will  transfer some of it back to the cooling earth by night  It is well recognised that nights are cooler when there is less wind. (convection).

It is surprising that this genuine greenhouse effect is ignored completely by the IPCC. .

This is even more surprising when you consider how this effect is affected by changes in climate influences. Changes in the Sun would be reduced at the surface as atnospheric cooling would partially reduce solar fluctuations.

The biggest surprise is that they ignore anthropogenic effects, which they are supposed to investigate. Humans exert considerable effforts to reduce loss of heat from the earth by convection. It is not only greenhouses, which can cover large areas, but a whole host of devices to protect humans, plants, and animals from cooling winds. There is an undoubted anthropogenic warming effect.

Why are there no campaigns to abolish greenhouses, shelter belts, basketball stadiums  larger buildings,and temperate agriculture, plus campaigns to mitigate the damage done, attempts to move to tropical locations and rely on troipical agriculture? It is a mystery

And why has Fourier been deliberately misunderstood and claimed to have been the originator of the theory that the earth is warmed by spectroscopic absorpion of the earth"s infra red radiation by so-called greenhoiuse gases when the physics behind this theory had not yet been discovered in 1822?

Fourier knew of infra red radiation.which had been discovered by William Herschel in 1800. but his only reference to it in his "Theorie Analytique de Chaleur " (1822) is as follows:   (Chapter I Section I, 16-21)

"To complete our theory it was necessary to examine the laws which radiant heat follows on leaving the surface of a body. It results from the observation of many physicists and from our own experiments that the intensities of the different rays, which escape in all directions from any point, depend on the angles which their directions make with the surface at the same point.We have proved that the intensity of a ray diminishes as the ray makes a smaller angle with the element of surface, and that it is proportional to the sine of that angle. This general law of emission of heat which different observations had already indicated, is a necessary consequence of the principle of the equilibrium of temperature and of the laws of propagationof heat in solid bodies"

Although commendable, this passage shows that Fourier did not understand electromagnetic radiation or its spectroscopic absorption properties.

The spectral absorption of atmospheric trace gases was first measured by John Tyndall in 1861 He found that several trace gases were capable of absorbing infra red radiation from the earth. The most important of these was water vapour
Arrhenius (1896) commends Fourier's idea but then states

He therefore clearly states that his topic, atmospheric spectroscopic absorption by trace gases is not the same as in a greenhouse and he does not mention the word. It is therefore puzzling how the two seperate phenomena became confused and who was responsible. Most of the references I have found seem determined to confuse the two. Perhaps this helps to sell the idea.