As the Medieval Warm period came to an end and the Little Ice age started to take hold, Vikings found it harder to cross an ice-filled North Atlantic. The following from IUPUI - Vikings in Greenland - An overview:

The Greenlanders missed an opportunity to establish trade with the native peoples of North America, which left them with only one possibility for acquiring necessities such as building timber and iron and for maintaining/creating a cultural identity.  These necessities had to come from Norway (Scandinavia), the home country, via Iceland.  The medieval warm period ... was coming to an end and icebergs, significant obstacles to boats, began to clog the shipping lanes.

Is history repeating itself? Are we heading for another Little Ice Age?

From European Public Broadcasting we get this story: 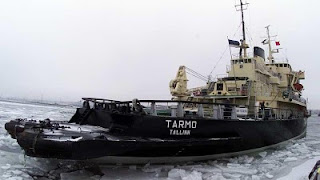 
In response to the harsh winter weather that continues to freeze Baltic waterways, the government has allocated an additional 3 million euros for this year's ice clearing work. Meanwhile, Economics Minister Juhan Parts is calling for the construction of a new icebreaker. The government approved the increase in the annual ice clearing budget at its weekly meeting on February 3.

Further we have a report from Baltic Business News;

Former prime minister and industrialist Tiit Vähi believes that the state should urgently order a new icebreaker, writes Äripäev.
“Instead of spending money on buying icebreaking services, the government should decide to buy another icebreaker,” says Tiit vähi.

At the moment, Estonia has two icebreakers, the Tarmo (pictured) and Zeus, but "difficult ice conditions" in the Gulf of Finland are forcing the Maritime Administration to look for a third.

No Ice to see here - Move along

(Thanks to Bruce and EUReferendum)


Riga Port asks government for assistance in breaking up ice

Altogether, 34 ships are trapped in ice in the Gulf of Riga at the moment, and businessmen note that the situation is very serious, writes LETA.

ST. PETERSBURG — Icebreakers have been called in to free dozens of ships that became trapped in ice in the Gulf of Finland near St. Petersburg last week.
The administration of St. Petersburg's port said at least 97 ships were still waiting for help on Tuesday, down from 160 ships two days ago.
The eastern Gulf of Finland has not seen such thick ice since 1992, according to the Federal of Sea and River Transportation Agency. In some places the ice is more than a meter thick.
Most of the trapped ships are cargo vessels, but some are passenger ferries. Many have been trapped for at least several days.