NZ CLIMATE TRUTH NEWSLETTER NO 262
MARCH 3rd 2011
THE GREENHOUSE EFFECT
The greenhouse effect is caused by absorption of infra red radiation from the earth by trace gases in the earth's atmosphere (see attachment). A greenhouse (also shown in the diagram) confines only a small part of the atmosphere, so the trace gas absorption is negligible. However, the earth inside can still be heated by the sun and the air can be warmed at its surface, but it cannot  escape, so the atmosphere inside the greenhouse is warmer than the outside, The same effect happens inside a car with closed windows left in the sun.

The greenhouse effect was first clearly identified by John Tyndall (Heat as a Mode of Motion 1863). He showed that several trace gases in the earth's atmosphere absorbed infra red radiation at discrete wavelengths, thus warming the atmosphere, reducing the escaping radiation and increasing the radiation from the atmosphere to the earth, thus causing warming.(attached).

Radiation consists of alternating electric and magnetic  field oscillations as shown in this diagram. It is a form of energy and therefore complies with the First Law of Thermodynamics, the conservation of energy. It is, however, not subject to the Second Law of Thermodynamics which is concerned with the conversion of heat energy into mechanical energy. Heat  consists of kinetic and vibrational energy (measured by temperature) of the molecules of all substances above absolute zero of temperature.  Some of its energy can only be transferred to another substance if that substance is able to take it, which means it must have a lower temperature.

Radiation is quite different. Its energy is given by the Stefan/Boltzmann Law, and it  is proportional to the fourth power of the absolute temperature of the emitter  (except for special systems like fluorescent tubes or lasers) .

When radiation is absorbed it either causes a change of orbit of the electrons in an atom or molecule or it gets dispersed as general kinetic and vibrational heat. In both cases the resulting additional radiation is emitted in all directions. Thus in both cases the radiation absorbed by greenhouse gases is partly re-emitted upwards and partly downwards where it returns to warm the earth

By far the most important greenhouse gas is water vapour. Its concentration is, however, so variable in time and space that we are unable to obtain an accurate average value. but it is roughly  4000 parts  per million .

So in order to find whether the greenhouse effect is increasing or falling it is mainly necessary to study water vapour.

This task is currently impossible. Weather stations routinely measure relative humidity, which is the ratio of concentration to the saturation value.
It is the property important for human comfort. Such measurements are too sporadic and unrepresentative of the earth in general to be much use to find if there is a trend up or down.

A sensible scientist would give up at once. However, climate scientists seem determined to try and pretend humans are harming the planet, so they decided to make an outrageous assumption. They assume that the average concentration of atmospheric water vapor is proportional to the temperature. There is no observational or theoretical evidence for this assumption.  Water vapour can then be called a "feedback" and left out of tables of greenhouse gases. They do not like to tell us that there is no way that they could find the average temperature of the earth, so it only applies to the "temperatures" "projected"  by models.

I attach a profile of water vapour in the atmosphere measured at Lauder in the South island. It shows that most is close to the surface but that some sort of average is impossible. I also attach a NASA map of the "column averages" over time, which shows that water vapour is mainly over warm places (the tropics).

So, having tucked the problem under the carpet we are bombarded with the problems of the second greenhouse gas, carbon dioxide, one tenth the concentration of the main gas. It is mainly measured over the sea where they try to argue that it rises steadily. I attach a chart from Imdonesia which shows it is not all that steady, but perhaps is going up. But does it matter? Without more information on water vapour we will never know. 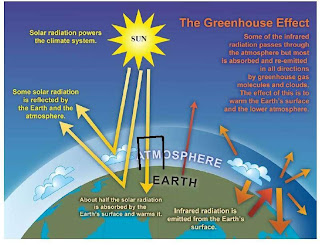 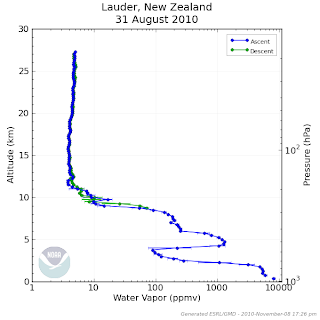 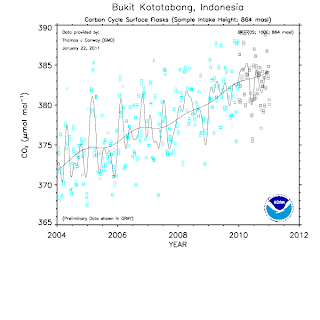 "To kill an error is as good a service as, and sometimes better than, the establishing of a new truth or fact"    - Charles Darwin
Posted by Geoff on March 03, 2011 26 comments: