Poll: 7PM Poll: Does Australia need a carbon tax?
As usual, this poll asks the wrong question. One of the answer is that "global warming is a con."

Well,  I KNOW that the hypothesis of man-made emissions of carbon DIOXIDE causing runaway global warming is a con, but I also acknowledge that generally it has been warming since we came out of the little Ice Age at ~1850.

Wind Energy: Is It Green Or Brown 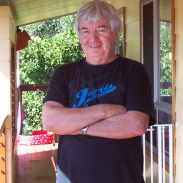 
My forebears the Vikings harnessed the wind to explore and settle parts of the globe other inhabitants could only dream of for another few centuries, but times change.
Ask any sailor slicing through waves on a fast tack while the sails strain and the wake stretches silently behind…Beautiful, clean and green - there’s nothing quite like harnessing the wind - until some yob in a power boat or jet ski, blasts past and shatters the natural harmony.
Unfortunately, the reality of wind power as an alternative energy source seems just like that.
Backed by Greens - inspired government subsidies and tax breaks, it is supposed to play a key role in meeting Australia’s Renewable Energy Targets of 20 percent by 2020.
Prime Minister Julia Gillard yesterday reneged on a key pre-election promise and announced another Greens-backed proposal to introduce a price on “carbon pollution” by July 1 next year, as a measure to promote alternative energy.
She said there would be a fixed carbon price for three to five years, then an emissions trading scheme with a “flexible'' price linked to international markets.
But there is ample evidence to suggest wind power as one major alternative is unreliable, uneconomical and very unfriendly to the environment.
Experience from places investing heavily in wind farms such as Denmark and California, shows they are inconsistent power generators, needing back-up from conventional energy sources.
Studies have also raised serious concerns about human health, and a devastating effect on bird life.

According to the American Bird Conservancy, new draft voluntary US federal guidelines focussing on wildlife impacts of wind energy will result in continued increases in bird deaths and habitat loss from wind farms.
“Bird deaths from wind power are the new inconvenient truth. The total number of birds killed and the amount of bird habitat lost will dramatically increase as wind power build-out continues across the country in a rush to meet federal renewable energy targets,” the organisation’s vice-president, Mike Parr said.
The Telegraph in Britain reported results of a study claiming wind turbines could cause heart problems, tinnitus, nausea, panic attacks and headaches among people living nearby.

Dr Nina Pierpont, a New York paediatrician, said she was convinced vibration and noise emitted by wind turbines could produce a range of symptoms she had named "Wind Turbine Syndrome" or WTS.
She examined the health of people living near wind farms in the US, UK, Italy, Ireland and Canada. As a result, she recommended wind turbines should not be built closer than 2,000 metres to housing.
"There is no doubt my clinical research shows that the infrasonic to ultrasonic noise and vibrations emitted by wind turbines cause the symptoms,” she said.
Another damning indictment of wind farms involves pollution created in forging rare earths into the powerful magnets they utilize to generate electricity. The Mail Online reports:


“The reality is that, as Britain flaunts its environmental credentials by speckling its coastlines and unspoiled moors and mountains with thousands of wind turbines, it is contributing to a vast man-made lake of poison in northern China.
This is the deadly and sinister side of the massively profitable rare-earths industry that the ‘green’ companies profiting from the demand for wind turbines would prefer you knew nothing about.
Hidden out of sight behind smoke-shrouded factory complexes in the city of Baotou, and patrolled by platoons of security guards, lies a five-mile wide ‘tailing’ lake. It has killed farmland for miles around, made thousands of people ill and put one of China’s key waterways in jeopardy.
This vast, hissing cauldron of chemicals is the dumping ground for seven million tons a year of mined rare earth after it has been doused in acid and chemicals and processed through red-hot furnaces to extract its components.

Back in Australia, more questions over Federal and State Government subsidies for wind farms were raised this week by chairman of the Carbon Sense Coalition, Viv Forbes, who said they should compete equally with other forms of power generation.
A qualified geologist and soils scientist, Forbes said there was no proof wind farms reduced carbon dioxide emissions, and it was ludicrous to believe a few windmills in Australia would improve global climate.


“The wind is free but wind power is far from it. Its cost is far above all conventional methods of generating electricity.
Wind power is intermittent, unreliable and hard to predict. To cover the total loss of power when the wind drops or blows too hard, every wind farm needs a conventional back-up power station (commonly gas-fired) with twice the design capacity of the wind farm to even out the sudden fluctuations in the electricity grid.
Why bother with the wind farm? Just build the backup and achieve lower costs and better reliability,” he said.

Meanwhile submissions to a Senate Inquiry into the social and economic impact of rural wind farms closed this month (February 10). The report is due on April 30.
Maybe that will go some way to answering the question: How “green” is this alternative energy source?
As Bob Dylan sang in his anthem of angst back in the Sixties, “ The answer my friend, is blowin’ in the wind…”


John Mikkelsen is a long-term journalist, former regional newspaper editor (Gladstone Observer) now regular columnist and freelance writer. Mikko is a friend who offered this article for reprinting. He is not a member of our party.  First published at Menzies House.