A friend has pointed out two films being shown at his 12 yo child's school.

My friend, I'll call him Ron, says: "I wouldn't be that concerned about this, except that the majority of the students were totally won over by this video to the point that they refuse to listen to any facts. It is alarming that Senior Geography students seem to not be equipped to evaluate an argument on facts and reason, but rather on emotion and fluffy animals.

To supposedly present both sides of the story, he also showed the students this pathetic piece of stupidity, which again doesn't present any facts, but makes climate realists look like they have their head in the sand."

The Bathurst 12 hr race has seen an impressive effort by Paul Freestone's Team driving a Corvette Z06 sponsored by The Climate Sceptics. 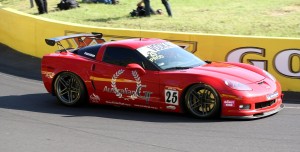 The day was full of drama for the team and attracted media attention - and not just for their controversial stand against CO2 being demonised by the green movement.

Firstly a fuel leak a day out from the race meant the car was in pieces 24 hrs out from the race,
Then just 10 hrs out another part  from Melbourne was needed and the truck bringing the part overnight was held up by a car accident.
Then at starting time the car was again in pieces but the team put the car minus a gearbox on the track so they could legally begin the race 2 hours later once all the repairs were done.
Despite all that they still finished the race second in their C class.

The car also had some dramas with a few laps to go and the gearstick was jumping out.
In the end Paul Freestone finished the race with out gear changes driving in fourth gear and still stayed ahead of the third place car.

The team believed they would have won their class easily if they had the part arrive two hours earlier, but all in all it was still a terrific team effort to finish 18th overall and second in the C class .

Leon Ashby, president of The Climate Sceptics, says the party is delighted with this result and see it as the type of spirit and effort Australians love.
"This is indicative of the people in our party and the movement overall -  Taking on a tough assignment and making a great fist of it". he said

"We look forward to future involvement with Paul Freestone, Hayden Pullen and  their racing team, We congratulate them on their amazing effort"