Are Greenies warming the Planet by Protesting?

The average person takes 24,000 breaths a day, breathing in approximately 6g of carbon dioxide, but breathing out around 800g during the same time. Over a year, you personally will add a net 290kg of CO2 to the atmosphere, just by exhaling. Multiply that by a global population of 6.5 billion and it adds up to a criminal 1.88 gigatonnes.

If we each merely cut out one breath in three, we could decrease the amount of CO2 entering the atmosphere each year by a staggering 0.63 gigatonnes. That’s 0.63 billion tonnes - the same effect as saving 5 million acres of land (an area the size of Wales) from deforestation, or recycling 192 million tonnes of waste instead of trashing it. 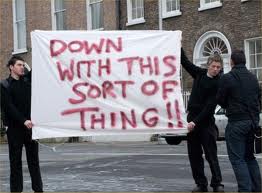 Or saving an area a third the size of Tasmania (16 million acres). But here's the clencher. Null hypothesis goes on to point out that if you exercise, you breathe more and harder. During a strenuous half hour exercise session "we could be expelling an extra 8.3g of carbon dioxide."  So, do your bit Greenies, Stop Exercising.


And remember, protesting - marching around, chanting slogans and waving banners around is like excercising.
Save the planet!  Stop Greenies Protesting.
Posted by Geoff on January 31, 2011 No comments: