BLOOD in their HANDS

I am getting increasingly angrier by the hour. Although the flawed AGW CO2 hypothesis has been falsified, the pushers of the AGW poison still blame any climate event on their mythical warming.
Is it still warming? Well, not according to this chart from Hadley-CRU:- 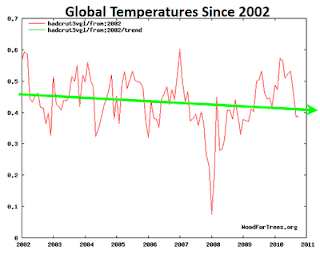 There is a lot of disinformation being spread by the Warmists.

The misinformation Industry is going full steam ahead:


When we talk about climate change, we mostly talk about complicated economic policy, markets and reports. But we need to start talking about what climate change actually looks like - and we don't need to look much further than Queensland.


Coal, oil, and natural gas all send carbon dioxide into the atmosphere when we burn them, and scientists say that this extreme weather is a direct result of those emissions.


Though you can't make a direct link between Australia's killer floods and climate change, they do hold a warning for the future: Scientists predict such extreme weather events will increase both in intensity and frequency as the planet warms.

Academia is also not faultless, promoting the Alarmist agenda.

Exam board accused of 'brainwashing' pupils with inaccurate climate graph

Britain’s largest exam board has been accused of “brainwashing” pupils by forcing them to use an inaccurate temperature graph that exaggerates the scale of global warming.

An Inconvenient Truth for Australian schools I think it is a form of child abuse to force feed a flawed film on our schoolchildren.

And on and on the Alarmist spin rolls out the rear-end emissions from male cattle.

It is a terrible thing to say, but blood is on their hands.  Instead of saying, we're so sorry - we were wrong to say AGW would cause droughts, as you can see above,they are now saying that the floods are due to AGW.

"Back then we weren’t nearly as clever and learned as you think yourselves to be today. Back then we had this silly notion that climate was cyclical, and if we didn’t prepare for it, we would have a repeat of the same tragedies to deal with in “about thirty years”.....
"Instead we had “post modern” minds like Tim Flannery “advising” the government that because of Anthropogenic Global Warming, SE QLD would be perpetually in drought from then on. “Forget dams and flood mitigation programs”, intoned the wise Dr Tim – “build desalination plants instead”....
"But then I remember that the world is in the capable hands of much cleverer people than those silly scientists back in the Seventies who believed climate was cyclical. Now the decisions are being made by clever people like Dr Tim Flannery
– and you.

That is when I weep for my fellow Man."


The drought that warmists said might “never break” just did

"The warmists who once claimed the drought was caused by global warming are now claiming they predicted these floods."

So, we must not let the Warmist Alarmist Greens get away with the lie that AGW caused the floods. We should write to our national papers, our local papers, We should also continually barrage our politicians to stop them installing a debilitating Carbon (Dioxide) Tax.