Everyday we get bombarded with facts and statistics. It can be very confusing to the average layman. 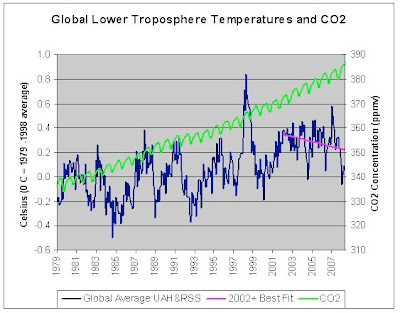 My Newsletter No 201X of February 2009, revised March 2010 (available on application) showed that published New Zealand records from 1868, 1920 and 1960 show that average temperatures in the main New Zealand cities since records began have not changed significantly from the figures published today

This is confirmed if the so-called "raw figures"  for seven selected New Zealand  weather stations, available from http://cliflo.niwa.co.niwa are plotted as "anomalies" compared with the 1971-2000 average as follows 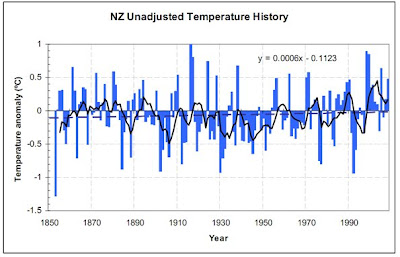 Yet, it is persistently claimed by The National Institrute of Water and Air Research (NIWA) that New Zealand temperatures are rising. This is the result, they claim. from "corrections" that have been made to early figures after changes of site.

Attempts to find details of these "corrections" made by the New Zealand Climate Science Coalition and by the ACT Party in the New Zealand Parliament have been unsuccessful until  NIWA  commissioned a detailed study of the problem  by the Bureau of Meteorology, Australia,  Their 169 page Report is now available on:- 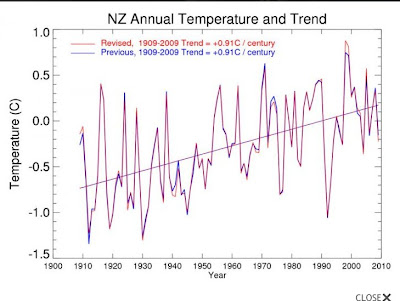 Although the Report comes up with a chart (above) which finds an identical "trend" (0.91ºC per century) to the previous NIWA chart, several other things were changed

This means that instead of a single stright line the chart should be divided into the indicated three parts, as follows:- 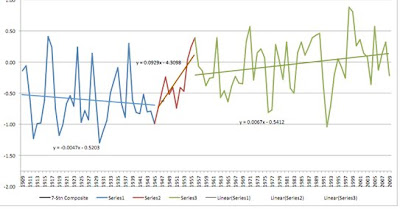 "The data and methodology provided in the reports from NIWA are taken as an accurate representation of the actual analyses undertaken. We are not in a position to question all of the  underlying analyses and data that have contributed to the final results, such as methods used
to compile raw data taken at stations. We do, however, perform some independent analyses as appropriate to the aims of the review as outlined above.

The review does not constitute a reanalysis of the New Zealand ‘seven station’ temperature record. Such a reanalysis would be required to independently determine the sensitivity of, for example, New Zealand temperature trends to the choice of the underlying network, or the
analysis methodology. Such a task would require full access to the raw and modified temperature data and metadata, and would be a major scientific undertaking. As such, the review will constrain itself to comment on the appropriateness of the methods used to undertake the ‘seven station’ temperature analysis, in accordance with the level of the information supplied".

One can only conclude that average temperatures in New Zealand cities have not changed significantly since records began.