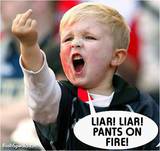 It's no wonder some people are taken in by the AGW hoax. The amount of lies and spin that are out there.  As Ian Plimer writes in his new book "How To Get Expelled From School: "If the science of human induced global warming is so strong then why is it necessary for the climate industry to engage in fraud, exaggeration, obfuscation, personal attacks, spin and the demonising of dissent?"

For instance, to my knowledge the ABC have not reported anything about the leak of the "Climategate"  e-mails. E-mails that have shown that the leading alarmist scientists have lied and cheated and tried to suppress papers that go against their falsified hypothesis.

Seth Borenstein is also an activist journalist from Associated Press. He has been called out by Newsbusters here and by Steve Goddard here

WASHINGTON (AP) — Federal officials say the Arctic region has changed dramatically in the past five years — for the worse.
It’s melting at a near record pace, and it’s darkening and absorbing too much of the sun’s heat.


Right. NSIDC reported in their last Arctic Sea Ice News that autumn  freeze up was 40% faster than normal. It is pitch black in the Arctic, and ice extent is essentially identical to 1996.
The Arctic acts as Earth’s refrigerator, cooling the planet. What’s happening, scientists said, is like someone pushing the fridge’s thermostat much too high.

Read more to see how wrong Borenstein is here
Posted by Geoff on December 04, 2011