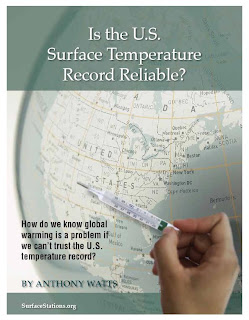 
The U.S. Government Accountability Office (GAO) has just confirmed the pioneering research conducted by Anthony Watts, the author of the prominent Web site “Watts Up With That?. Watts showed in a 2009 report (right) that the U.S. Historical Climate Network (USHCN) surface temperature record is unreliable. The GAO now concurs.

USHCN data is combined with temperature records from around the world to determine global temperature trends. This trend is then used as the basis of the assessment reports of the UN Intergovernmental Panel on Climate Change on which governments base climate and energy policy costing hundreds of billions of dollars.

But the GAO has found that “42 percent of the active stations [in the USHCN] in 2010 did not meet one or more of the siting standards.”

It has taken the GAO two years but Anthony Watts' records have been confirmed. Also, although there are different interpretations, the Berkeley Earth Surface temperature (BEST) confirms that there has been a long pause in global warming. Global warming real? Not recently, folks. The black curve in the graph confirms what experts have known for years, that warming stopped in the mid-1990s, when the Sun was switching from a manic to a depressive phase.

And just to make the alarmists' day, latest report from Professor Nils-Axel Morner confirms that

Contrary to prevailing scientific opinion, a Climate Change conference organised by the University of Mumbai and the Liberty Institute, New Delhi, and INSTUCEN India study centre on Friday claimed that the sea levels were not rising and carbon dioxide did not pose a special threat to the climate. Sea levels in the Indian Ocean were not rising and cities like Mumbai, islands like Maldives or Tuvalu would not be affected at all, speakers stated.
The audience clapped at every statement made by Professor Nils-Axel Morner, retired professor from Stockholm University, who enlightened a large group of appreciative students and professors on the perils of the estimates of the Intergovernmental Panel on Climate Change (IPCC). He attacked Maldives president Mohammed Nasheed's claims that his island nation was drowning and said this was totally unfounded in observational reality. The one-day conference, “Shifting science and changing policy,” was hosted by the Centre for Extra Mural Studies at Mumbai University.