The Science is NOT settled despite a tendentious 4 Corners report

On the Four Corners episode "The Climate War", our Chief Scientist Professor Chubb expressed the view that he thought the debate on climate change keeps reaching new lows. The trouble is we have not had a debate on the science behind the anthropogenic global warming scare. He also said that we need to have very serious discussion. Well, in his position as Chief Scientist, why doesn't he set up a discussion forum. Not a stacked forum (like The Climate War) but an open forum with all sides represented.

He could start with an explanation of this graph of global temperatures showing warming from 1978 to 2002 and no warming since: 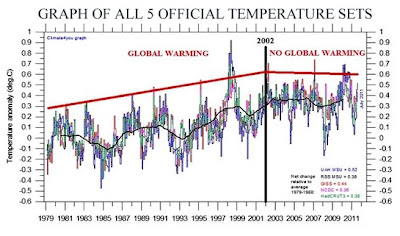 The above graph is part of a post by John L Sullivan on Climate Realists. He is countering a blatant alarmist Washington post oped piece by Richard Cohen. He could well be addressing Professor Chubb.

Sadly for Cohen the facts below prove he is just another mendacious mainstream propagandist of climate alarmism.

He starts by mentioning the resignation of professor Ivar Giaever from The American Physical Society previously recorded on TCS blog here. He then goes on to itemise 50 former IPCC experts who have seen the light. He gives a quote from each. Here are a few:

Can we trust the scientists that are pushing the alarm? Consider these statement from Phil Jones included in the climategate emails:

March 11, 2003
“I will be emailing the journal to tell them I’m having nothing more to do with it until they rid themselves of this troublesome editor.”


July 8, 2004
“I can’t see either of these papers being in the next IPCC report. Kevin and I will keep them out somehow — even if we have to redefine what the peer-review literature is!”


Can We Really Call Climate Science A Science?

The debate between “warmists” and “skeptics” is about whether human Co2 emissions are the cause of warming, whether the relatively small effects of these emissions will compound into larger changes, and, if so, whether, the benefits of remediation outweigh the costs.

In Australia we must also ask some follow-up questions:
Professor Gregory continues:


First, Ivar Giaever, the 1973 winner of the Nobel Prize in physics, resigned from the American Physical Society over his disagreement with its statement that “the evidence (on warming alarmism) is incontrovertible.” Instead, he writes that the evidence suggests that “the temperature has been amazingly stable, and both human health and happiness have definitely improved in this ‘warming’ period.”

Second, the editor of Remote Sensing resigned and disassociated himself from a skeptical paper co-authored  by University of Alabama Climate Scientist Roy Spencer after an avalanche of criticism by “warmists.” His resignation brings to mind Phil Jones’ threat to “get rid of troublesome editors” (cited above).

Third, the New York Times and other major media are ridiculing Texas Governor Rick Perry for saying that global warming is “not proven.” Their message: Anyone who does not sign on to global warming alarmism is an ignorant hayseed and clearly not presidential material.

Gregory says that the Giaever story shows that there is no consensus or as he puts it - disputes claims of "inconvertible evidence." The editor's resignation he describes as "unprofessional behaviour."


Third: The media is tarring  and feathering  Rick Perry, we now see,  for agreeing with Nobel laureate Giaever and a host of other prominent scientists.  I guess if  Perry is a know-nothing Texas hick (or worse, a pawn of  Big Oil) so is every other scientist who dares to disagree with the IPCC Central Committee.


False claims of consensus and inconvertible truth reveal a political or ideological agenda wrapped in the guise of science.  The incontrovertible bad behavior of the warmists has led skeptics to suspect base motives,  and who could blame them?

Of course, none of this contrary opinion found its way to air in Four Corners tendentious "The Climate Wars."
Posted by Geoff on September 20, 2011