How to get expelled from school

The tragedy is in the title. Children are being abused by the education system and by our Governments. They are being taught that invisible trace gas carbon dioxide  is a pollutant. 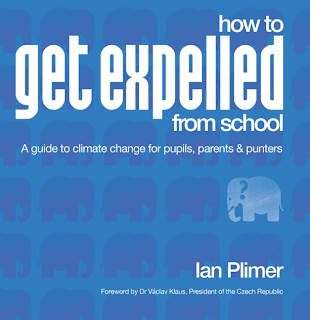 Professor Plimer's new book  is subtitled "A guide to climate change for pupils, parents and punters."


Description by the  publisher: (LINK in title)


Are pupils, parents and the public being fed political propaganda on climate change? Now is your chance to find out. Professor Plimer gives 101 simple questions with answers for you to ask teachers, activists, journalists and politicians. The climate industry adjusts the temperature record and withholds raw data, computer codes and information from scrutiny. Computer predictions of a scary future don’t agree with measurements. Past natural climate changes have been larger and more rapid than the worst case predictions yet humans adapted.  Is human-induced global warming the biggest financial and scientific scam in history? If it is, we will pay dearly.

He won the Leopold von Buch Plakette (German Geological Society), Clarke Medal (Royal Society of NSW), Sir Willis Connolly Medal (Australasian Institute of Mining and Metallurgy), was elected Fellow of the Australian Academy of Technological Sciences and Engineering and was elected Honorary Fellow of the Geological Society of London. In 1995, he was Australian Humanist of the Year and later was awarded the Centenary Medal. He was Managing Editor of Mineralium Deposita, president of the SGA, president of IAGOD, president of the Australian Geoscience Council and sat on the Earth Sciences Committee of the Australian Research Council for many years. He won the Eureka Prize for the promotion of science, the Eureka Prize for A Short History of Planet Earth and the Michael Daley Prize (now a Eureka Prize) for science broadcasting. He is an advisor to governments and corporations and a regular broadcaster.

Email ThisBlogThis!Share to TwitterShare to FacebookShare to Pinterest
Labels: Connor Court, How to get expelled from school, Ian Plimer