Rick Perry - the man to watch in the US Presidental Race 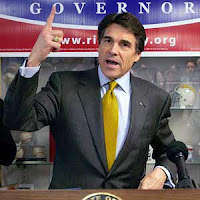 
(Texas) Gov. Rick Perry found himself at the center of attention again on Wednesday, this time after reiterating his skepticism over climate change and his belief that some scientists have manipulated data to keep the issue alive.
Two days after drawing fire for blunt comments regarding Federal Reserve Chairman Ben Bernanke, Perry decried the global warming issue as "politicized" and questioned the science behind it while speaking at an event in New Hampshire.
Perry has been outspoken on the issue for years, but his comments are getting attention like never before now that he's a front-running Republican presidential candidate.


Rick Perry Gets It on Global Warming

Texas Gov. Rick Perry's entrance into the GOP presidential primary has almost overnight deflated the prospects of former Massachusetts Gov. Mitt Romney, and Perry’s skepticism of man-made global warming has been one of the key factors.

Perry rides into the presidential contest with a bold brand of global warming skepticism that is sure to ignite tea party enthusiasts and GOP primary voters. Perry told the Guardian that global warming is "one contrived phony mess that is falling apart under its own weight."

The other Sceptical candidate is Michele Bachmann. The infighting has started. The Houston Chronicle:

So after some elbowing, our Shaky Hand Productions crew asked Gov. Rick Perry a direct question — and got a complete sentence response — Monday at the Iowa State Fair. The question: What makes you a better candidate than Rep. Michele Bachmann, who would be his chief rival for Iowa’s social conservative voters?
We asked Bachmann the same thing about a week earlier, but — as you remember — her press people literally put their hands over The Shaky Hand camera and physically blocked us from getting close to Bachmann. Now more reporters are complaining about similar treatment from Team Bachmann.