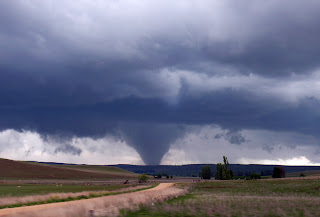 A fresh report Today of another tornado hitting New Zealand's North Island (Here) will have all the doomsaying Global Warming Alarmists coming out of the woodwork.  Let's examine some aspects of tornadoes......


"If there is one weather phenomenon global warming theory does NOT predict more of, it would be severe thunderstorms and tornadoes.
Tornadic thunderstorms do not require tropical-type warmth. In fact, tornadoes are almost unheard of in the tropics, despite frequent thunderstorm activity."

Meanwhile, what do the Alarmist/Warmists say?

Kevin (We can't account for the lack of Warming) Trenberth:


It is irresponsible not to mention climate change. … The environment in which all of these storms and the tornadoes are occurring has changed from human influences (global warming).


Climate change is present in every single meteorological event, in that these events are occurring within a baseline atmospheric environment that has shifted in favor of more intense weather events.

Meanwhile Think Progress  has instead chosen to adopt the Pat Robertson model and claim Divine Justice for those redneck Republican climate change deniers in the south. The congressional delegations of Alabama, Tennessee, Mississippi, Georgia, Virginia, and Kentucky overwhelmingly voted to reject the science that emitting carbon dioxide into the atmosphere is dangerous. They are deliberately ignoring the warnings from scientists and from Gaia.

Tom Nelson recorded an MSM media inconsistency when he reports that


Newsweek blamed cooling for tornadoes in the 1970s; now they blame warming for tornadoes: Inevitably the devastating tornadoes that killed more than 300 people in the US prompted Newsweek to ask: "Is (man-made) global warming responsible for wild weather?" The answer, it found, is “yes”.Another Newsweek article cited “the most devastating outbreak of tornadoes ever recorded”, killing “more than 300 people”, as among “the ominous signs that the Earth’s weather patterns have begun to change dramatically”. But that article was published on April 28, 1975, when Newsweek listed the US tornado disaster of 1974  as one of the harbingers of GLOBAL COOLING heralding the approach of a new ice age.

So do scientists agree with Professional Alarmists like Trenberth and Mann?


But according to researchers, a confluence of seasonal oscillations in weather patterns, rather than climate change, is to blame. And growing populations mean that grim casualty figures from such events may become the norm.

"I don't think there's any way of proving climate change is responsible for the weather patterns this week and week before," says meteorologist Howard Bluestein, of the University of Oklahoma in Norman.

AFP reports: Grady Dixon, assistant professor of meteorology and climatology at Mississippi State University said it would be "a terrible mistake" to relate the up-tick to climate change.

Craig Fugate, administrator of the Federal Emergency Management Agency (FEMA), also dismissed Thursday climate change as a factor in the deadly tornadoes: "Actually what we're seeing is springtime," he said.
"Many people think of Oklahoma as 'Tornado Alley' and forget that the southeast United States actually has a history of longer and more powerful tornadoes that stay on the ground longer."

Imy of the National Oceanic and Atmospheric Administration: "We knew it was going to be a big tornado year," he said. But the key to that tip-off was unrelated to climate change: "It is related to the natural fluctuations of the planet."

By James Rosen    Published April 28, 2011      FoxNews.com
A top official at the National Oceanic and Atmospheric Administration (NOAA) rejected claims by environmental activists that the outbreak of tornadoes ravaging the American South is related to climate change brought on by global warming.
Greg Carbin, the warning coordination meteorologist at NOAA’s Storm Prediction Center in Norman, Oklahoma, said warming trends do create more of the fuel that tornadoes require, such as moisture, but that they also deprive tornadoes of another essential ingredient: wind shear.
Posted by Geoff on May 04, 2011