Posted by Geoff on April 07, 2011
Viv Forbes of the Carbon Sense Coalition 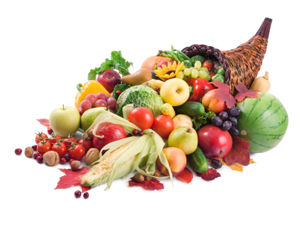 (you can link to a print friendly PDF of this newsletter by clicking on title)
We are told that the carbon tax will be "revenue neutral".

Big deal. So was the budget in Soviet Russia – they took 100% of your income and spent it all.

But carbon tax collectors look like spending far more than their income.

Those magicians in Canberra are going to reimburse all "low income" people for the effect of their carbon tax on the cost for electricity and food. And also reduce the petrol excise. And exempt export industries. And pay our share of the UN Cancun Climate giveaway of $100 billion per year. And give subsidies and tax breaks to Green Energy. And purchase carbon credits. And provide $800 million per year to the Climate Research Industry. And pay $5.6 million annually to feed the Tom Foolery Climate Commission. And pay the bills for the wall-to-wall meetings of the Climate Change junkies. And bribe farmers with soil carbon mirages. And pay to set up the Garnaut Carbon Bank. And pay for Garnaut's Independent Carbon Regulator.  And fund the Henry reforms of tax and social security.

We have a modern fiscal miracle –
"Carbon Tax – the Magic Horn of Plenty that never runs dry". 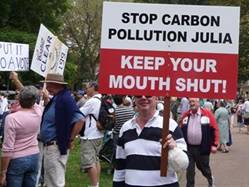 Everyone Welcome. Send a big message to Gillard and the Greens.
See:     http://www.nocarbontaxrally.com/no_carbon_tax_rally.html 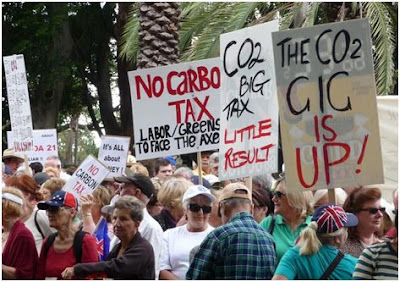