Posted by Geoff on March 01, 2011
CNNMoney has published a report entitled Global Warming's "Biggest Jerks." They are 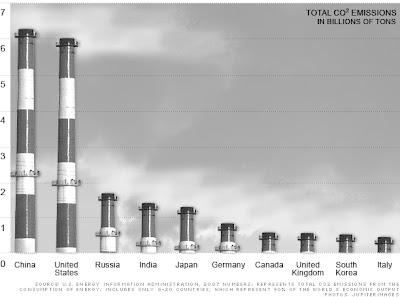 Notice  that the first four are China, The United States, Russia and India. None of these countries has or intends to have a price on carbon (dioxide emissions.) Australia doesn't even make the top 10. The fifth country, Japan, last December turned its back on the Kyoto agreement.
Why is it then that our PM says if we don't put a price on carbon (dioxide emissions), we will be left behind? We are like a sardine trying to steer a pod of whales.
To be fair, CNN's next graph (Link in title above) show Australia to be the biggest per capita "polluter."
(H/T Bruce)
China CNN Money CO2 India Russia USA