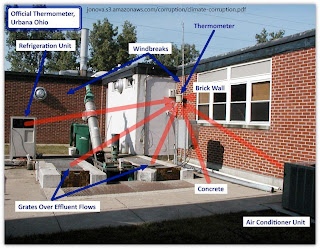 I have previously posted David Evans' paper : "Is the Western Climate Estabishment Corrupt." Anyone who attended the Anthony Watt's tour of lectures in the middle of 2010 would be familiar with photos like this one.
Anthony has done an audit of Climate stations and found most of them wanting (link in title above.)
David's paper starts:
"SUMMARY FOR POLICYMAKERS.
How many excuses does it take? The Western Climate Establishment has allowed egregious mistakes, major errors, and obvious biases to accumulate — each factor on its own might be hard to pin down, but the pattern is undeniable.
The Western Climate Establishment is Cheating
In the meantime, here is another "Climate Station." It is the resort at Cancun, Mexico where the AGW hypothesis believers are gathering to plot for a world government under the disguise of runaway man-made global warming. Before they have held their conferences in cold parts of the world and almost get frozen out. This time they have dodged the cold to swelter in steamy Mexico while Europe records some new COLDEST on record temperatures. 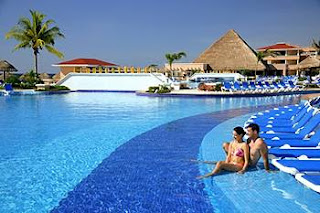