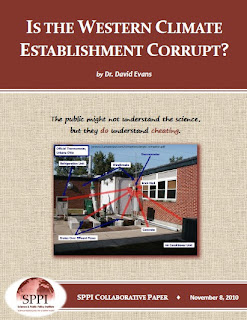 Ther are a few quotes that are classic:

The corruption of climate science has become so blatant, so obvious, that even non-scientists can no longer throw their hands in the air, and say ‘I don’t know’.  You don’t need a PhD to know it is cheating to place thermometers near artificial heat sources and call it ‘global warming

Key findings of the paper include:

* Official thermometers are overwhelmingly in warm localities such as near air conditioner exhaust vents, buildings, concrete, tarmac, asphalt, and even fermenting vats of warm sludge.
* Officials hide the modern ARGO data which shows the world’s oceans are cooling.
* They ignore hundreds of thousands of weather balloon results that show the climate models overestimate future warming by at least 300%.
* Officials frequently point to the last 130 years of global warming. But almost never mention the full story: that the planet started the current global warming trend before 1700, over a century before humans started pumping out meaningful amounts of CO2.

* Leading authors publish a crucial graph with a deceptive colour scheme designed to imitate the results they wish they’d got. Why did a leading journal publish such a naked and childish attempt at cheating?

* Their adjustments blatantly transform the original raw data from thermometers, often creating rising trends. They also selectively ignore thousands of other thermometers.
* Researchers repeatedly go out of their way to hide their records, and dodge FOIs.
* The Russian, Chinese and Indian climate establishments, which are financially independent of the western financial establishment, are all skeptical. As are scientists from other branches of science, as well as many older or retired climate scientists (who have nothing to lose by speaking their minds).
Concludes Dr. Evans,

“Once one or two major news outlets start printing these photos of official thermometers near artificial heating sources, and points out the deception, the rush will be on for our elected representatives to abandon the Global Warming Crusade. No one would want to be seen to be taken in by half-truths and shameless deception. Who wants to look gullible because they didn’t ask the obvious burning questions? Those who support conclusions based on corrupt behaviour will be seen as negligent for not having considered the serious evidence here.