Revisiting the Elimination of the MWP Scam

In the beginning there was an AGW Plan. Doctor David Deming wrote a paper and IPCC Lead Author Jonathan Overpeck thought that David was in sympathy with the Alarmist scammers. Overpeck emailed Deming saying that they had to get rid of the MWP. Phil Jones referred to it in the Climategate emails.
David gave evidence to the Senate enquiry, although as he hadn't archived the email, didn't mention Overpeck. Later, Overpeck put his hand up as the author.

Not long after, Mann et al produced the flawed "hockey stick" graph. As we know, this was exposed by McIntyre and McKittrick. It made a mockery of the old  Garbage-In Garbage-Out (GIGO). When Canadian phone numbers were entered, THEY produced the hockey stick - so Garbage-In, HockeyStick-Out (GIHO?)

Ever since then, the charlatan IPCC scientists have been trying to justify the MWP, to eliminate the MWP in order to incorrectly show that the late twentieth warming was unusual (although Phil Jones in a BBC interview admitted it wasn't.

Although we constantly have proof the the MWP happened ( inter alia here, here and here.) it seems the fraudulent IPCC scientists are preparing to "eliminate" it again. 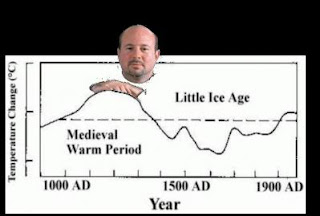 A usual reader of the blog sent me yesterday an interesting news from a Portuguese newspaper. It deals with the classic Medieval Warm Period problem, in the most green Portuguese newspaper. I immediately recognized one of the worst environmental journalists in Portugal, dealing with one of my favorite issues. Interestingly enough, Ricardo Trigo, a portuguese climatologist, was trying to explain the pseudo-science behind climate change and global warming, confusing things like Greenland's vikings and Maunder's Minimum.

But what really interested me in the story was a reference to Phil Jones, the person in the center of the ClimateGate controversy. And references to a conference in Portugal, regarding the Medieval Warm Period. I spent some time trying to figure out what had happened. Turned out that I had not read the news with attention: the conference had happened a month before!

More here. Boy, these guys don't know when to lie down, do they? I wonder if they are already shredding e-mails and reports.

An interview on Russian TV re Climate Fools Day.

Global warming sceptics in the UK have gathered to mark what they've dubbed 'Climate Fools Day'. On this date two years ago, snow fell in London as the British Parliament was debating a bill to tackle global warming. It was the first such early snowfall for over eighty years. Activists claimed the ironic coincidence was just more proof that the bill is a waste of billions of tax-payers' pounds. One of those doubting the reality of climate change is Reverend Philip Foster, who joins us now live from London.


Quote from the Reverend Phillip Foster: "....the 'Consensus' so called, science does not work by consensus, science works by sceptical looking looking at the evidence..."