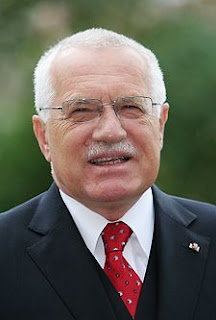 Czech Republic President Vaclav Klaus has previously said that "environmentalism is a religion" and, in an answer to the questions of the U.S. Congressmen, a "modern counterpart of communism" that seeks to change peoples' habits and economic systems.

On Friday, in an opinion piece in The Spectator entitled "Thank heavens for Bob Carter, "The Australian professor deserves thanks and praise for repudiating the heretic-hunting climate orthodoxy."

He again refers to the undemocratic 'experiment' that was communism. (I wonder if Mr Klaus is aware of Julia's undemocratic Carbon (dioxide) Tax Committee?) He likens the Warmist arguments "to the arguments of the former politicians, journalists and public intellectuals in Communist Czechoslovakia."

It is evident that science plays no part in the current public policy debate, neither in Kyoto, nor in Copenhagen, nor at the United Nations General Assembly or the EU summits. There is just the pretence of science and the wishful thinking that there exists an undeniable scientific consensus.