Source: The Australian's Joe Kelly. Now Joe Kelly, in The Australian (Link in Title) writes: "The government says members of the multi-party committee should be committed to establishing a price on carbon, and its deliberations will be in secret until an agreement is reached."
Mr Combet will Chair the Committee.
Liberal MP Dennis Jensen said the government was effectively ruling him out of the committee, add

ing: “I'm probably the most highly qualified scientist in this place.”
He said he was being ruled out because he didn't “believe in a carbon price”. (See Royal Society or Royal Commission) Dennis writes in Quadrant on-line:" Admission to the Gillard government’s climate change committee is very similar to admission to the former Soviet Union’s parliament, only people of one view need apply! In the case of the Soviet Parliament, in order to stand for election, you needed to be a member of the Communist Party (perhaps this is why the premise for the committee has so much appeal to Gillard, given her previous membership of the Socialist Alliance – a group who were essentially communist in outlook). In order to get onto the climate change committee, not only do you need to be a signed on anthropogenic global warming believer, but you also need to believe that the only way that you can address the problem is not only through abatement of carbon dioxide emissions, but you need to apply a price on carbon dioxide."
Back to Mr Combet.

And while we are asking the questions, how about evening up the balance of the scientists, how about adding Professor Robert M Carter, Doctor David Evans and Professor Ian Plimer?
Or was your statement about a pre-ordained position a porkie?

Please excuse the wind noise (it's not Baked Beans!) 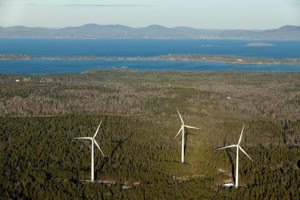 Picturesque Vinalhaven Island in Penobscot Bay on the coast of Maine is usually tranquil. That was before the arrival of three giant wind turbines. The community was given some information and they voted for the Wind Turbines. They thought that they would get cheaper "greener" energy. Residents were told that ambient noise would muffle the turbines.

The New York Times quotes resident Art Lindgren: “In the first 10 minutes, our jaws dropped to the ground. Nobody in the area could believe it. They were so loud.”


More from the New York Times:
"They are among a small but growing number of families and homeowners across the country who say they have learned the hard way that wind power — a clean alternative to electricity from fossil fuels — is not without emissions of its own.
Lawsuits and complaints about turbine noise, vibrations and subsequent lost property value have cropped up in Illinois, Texas, Pennsylvania, Wisconsin and Massachusetts, among other states."

This is part of the technology promoted by the Greens. As a warning, before it becomes a problem to you, hear some of the disgruntled residents of Vinalhaven.