Latest on Seal Level and Sea Ice and Global COOLING

The latest data from the University of Colorado shows that Sea Level is Falling In 2010: 'Since start of hottest year ever, sea level has fallen 10 mm' 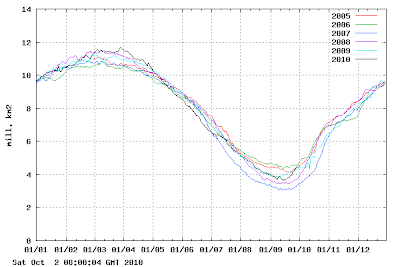 Geologist Don Easterbrook in his ICCC-4 announced paper, The Looming Threat of Global Cooling, noted the undeniable link between the Pacific Decadal Oscillation (PDO) shifting to its warm mode in 1915 and 1977 and global warming resulting both times. Conversely, in 1945 and 1999 the PDO moved to its cool mode and the globe cooled right along, despite a rapid increase in atmospheric CO2 during the period. What’s more, climate changes in the geologic record show a regular pattern of alternate warming and cooling with a 25-30 year period for the past 500 years. Easterbrook thereby concludes that we should “expect global cooling for the next 2-3 decades that will be far more damaging than global warming would have been.” 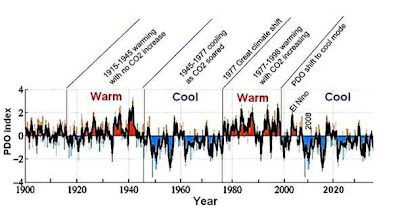 It begins and ends with: "There is strong evidence that the warming of the Earth over the last half-century has been caused largely by human activity, such as the burning of fossil fuels and changes in land use, including agriculture and deforestation."

But adds riders such as (The report) lays out clearly where the science is well established, where there is wide consensus but continuing debate, and where there remains substantial uncertainty."

And "It is not possible to determine exactly how much the Earth will warm or exactly how the climate will change in the future, but careful estimates of potential changes and associated uncertainties have been made. Scientists continue to work to narrow these areas of uncertainty. Uncertainty can work both ways, since the changes and their impacts may be either smaller or larger than those projected."

Professor Anthony Kelly, one of the 43 Fellows who called for the change, says he is reasonably satisfied with the new guidance. "It's gone a long way to meeting our concerns," he said. "The previous guidance was discouraging debate rather than encouraging it among knowledgeable people. The new guidance is clearer and a very much better document."


Professor Ian Plimer, author of the best selling "Heaven+Earth" is quoted by the Australian as saying that the society's statement was a "wonderful breath of honesty and fresh air from an organisation that has been politicised".

"Science is always uncertain," Professor Plimer said."Science doesn't work by voting. It is not a democracy, it works on evidence."

However, nothing seems to get through to the hard nosed Alarmists. New Climate Change Minister Greg Combet (Hey, Greg are you aware that climate has changed from the beginning of time?) foolishly said the Royal Society's switch would not have any influence on the government's push to put a price on carbon.

"The government accepts the climate science," Mr Combet said. "The debate has moved on."

Sounds a lot like the Flat Earth Society, Greg.

Leon Ashby, President of The Climate Sceptics, has been calling for a Royal Commission into the "science" of Man-made Global Warming. He is now joined by Dr Dennis Jensen, member for Tangey, who is, to the best of my knowledge, the only Scientist in Federal Parliament. You can read Dennis' reasoning on Quadrant Online. Dennis notes that Ms Gillard's "climate change 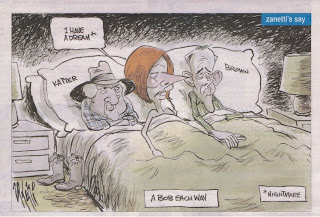 committee is very similar to admission to the former Soviet Union’s parliament, only people of one view need apply!" However, when questioned in Parliament the Prime Minister "made the Orwellian statement that the committee was to have a completely open mind. On what, pray tell, Prime Minister?"

Read the full article at Quadrant (link above) or at Menzies House. Dennis concludes: "In conclusion, I believe that there needs to be a review of the issue. The review needs to be rigorous, not some kludged up Committee of Predetermined Outcomes. A Royal Commission into the science is required."

I believe that we have a fairly small window. We must write to Senators on both sides of the House and also the two leaders and our local member. The more emails they get, the more they will take notice. Think of the anti-ETS campaign which sunk a charge on Carbon (Dioxide) the first time.