There is a depicable bloody video created by a mob called 1010global.org

The video shows Realists being blasted to bits by the fools who deny the science that shows that Co2 is not causing runaway global warming. Stories re this horrendous despicable video are here by James Delingpole, Anthony Watts "the most disgusting climate and carbon reduction video ever", Chris Horner "Just How Low Can Big Green Go?" and Paul Chesser "Blowing Up the Climate Skeptics"

See also related item on Drum Unleashed by Anthony Cox and Joanne Nova.
Killing climate realists is not a new theme...A public appeal has been issued by an influential U.S. website asking: “At what point do we jail or execute global warming deniers.”

How could any sane person think that this video could help their cause - even a cause so warped as the AGW scam created to terrify people.

Well, William McKIbben of 350.org infamy, and, surprise, surprise, the (UK) Guardian; ActionAid (Govt of UK 2nd largest funder in 2009); The Carbon Trust (surely #1 on the list of quangos-to-go); The Energy Saving Trust.

Well, I hope that they are proud!

Paul Chesser tells us that William McKibben backs away from this stupid, awful video

"Commenter Susan made me aware in my earlier blog post that 350.org's Bill McKibben, a partner with 1010.org, has issued a statement that claimed his group had nothing to do with their gross-out, kill-the-deniers video, and called it "disgusting." From his statement, which he issued after learning about the video after he (surprise!) climbed off a plane in Boston:

Climate skeptics are going to make a big deal of this. The video represents the kind of stupidity that really hurts our side, reinforcing in people's minds a series of preconceived notions, not the least of which is that we're out-of-control elitists. Not to mention crazy, and also with completely misplaced sense of humor....

October 4, 2010
Sony and Kyocera Mita are no longer listed as sponsors of the violence-advocating 10:10 climate group. (h/t Paul Chesser)

If you can't stand the heat, how will you feel about an Ice Age?

On Climate Spectator, Sophie Vorrath, in an article headed:

Sophie reviews a book of cartoons by Judy Horacek.

Sophie writes "How do you solve a problem like climate change?" Well, Sophie, Climate has been changing since the beginning of time. I think you are trying to say "How do you solve a problem like man-made global warming?" It's true that man's using of fossil fuels has contributed to increased atmospheric CO2. What is not so certain is whether increased CO2 causes runaway warming. There is not one peer-reviewed paper proving this, however, there are at least 800 peer-reviewed papers (eg Lindzen, Miskolczi etc) showing it not to be true. 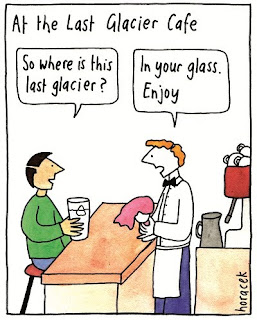 As to Judy Horacek's reference to the "Last Glacier," many glaciers are now growing - See http://www.iceagenow.com/growing_glaciers.htm

The political body - the Intergovernmental Panel on Climate Change has been exposed as fudging results and using non peer-reviewed Alarmist articles.

What we need is a Royal Commission into the supposed "Science" of man-made Global Warming to seek the truth. Write your Senators and youe local member calling for a Royal Commission
Posted by Geoff on October 02, 2010 No comments: