The President of The Climate Sceptics Leon Ashby has announced that its supporters are going to campaign and lobby vigorously for a royal commission into the science on Global Warming over the coming months.
The party is all fired up over the idea that a committee will debate the price and mechanism for reducing CO2, without checking the actual proof that CO2 emissions are the cause of Global warming.

Mr Ashby says "The Intergovernmental Panel on Climate Change (IPCC) has been discredited. With some of its findings being taken from non peer reviewed comments from various green groups and falsified Temperature records, we owe it to our nation to get our facts correct."
The Environmental award winner believes we need the scientific facts to be clear in this issue.
"If it was conclusively demonstrated that by adding 3 parts per ten thousand of CO2 to the air by 2010 sea levels will rise 6 metres, I will gladly change my views on the matter and campaign for action" he said
"However If the evidence shows increasing CO2 levels will make no discernible difference to global temperatures or sea levels then we must realise a CO2 tax is a useless action.
I believe a royal commission that examines evidence from the worlds leading scientists and researchers would bring the scientific debate to a fair conclusion."


The questions we want answered are these

2) Which Scientists have been able to describe, collect data on and calculate the greenhouse effect showing it is (or is not) increasing due to Human Greenhouse emissions?

3) If CO2 levels rise to 700 ppm, what Global temperature and sea level increases are able to be calculated as the result?

5) What level of commitment from overseas countries makes CO2 reduction in Australia worthless and pointless?

Once these questions are answered by a royal commission, as a society we can then reach an agreed position on action much more easily.

Leon Ashby
President The Climate Sceptics
Centenary Medal recipient for services to conservation and the environment
Posted by Geoff on September 30, 2010 No comments: 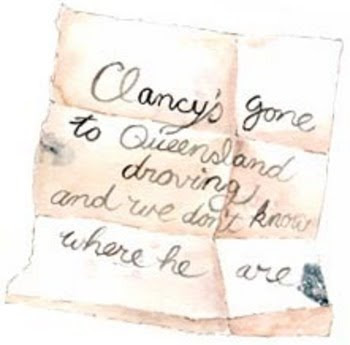 AB "Banjo" Paterson in his famous poem "Clancy of the Overflow" wrote:


I am sitting in my dingy little office, where a stingy Ray of sunlight struggles feebly down between the houses tall, And the foetid air and gritty of the dusty, dirty city Through the open window floating, spreads its foulness over all.

In his column yesterday in the National Times Peter Costello revealed some of the Greens policies, some of their urgent policies.

"I wonder if all those people who voted for the Greens in August expected that? They might have thought that a carbon reduction scheme was the number one Green priority or an end to logging. But it turns out it is euthanasia."

He tables some of their other policies. As I have written elsewhere on this blog, people should go

to the Greens website and look at their policies. There is a strong reason why they are called "Watermelons." As a father told his son recently after his son voted Green at the last Federal Election: "So, you don't want to inherit the family house? The Family Assets?"

Peter goes on to point out that the Greens poll strongest in the foetid, gritty, dusty, dirty city and the more you head out into the greenery their vote evaporates.


"Imagine taking a journey from the GPO to the state border. The Green vote is highest where you start - in the inner-city terraces and converted warehouses. In the seat of Melbourne, the Greens polled 36 per cent and in the seat of Sydney 24 per cent.As you move out through the suburbs to the quarter-acre blocks, the Green vote declines. When you get to semi-rural and country areas, it falls even further. In Gippsland, it is 7 per cent and in Parkes (New South Wales), it is 6 per cent."

My Senate Candidate Partner at the last Federal Election had this to say:


"One can only hope that Peter Costello might communicate some of these thoughts to global warming alarmist and brother Tim Costello who wants to help the poor by taxing them more, via carbon taxes. Christopher Monckton clarified that the draft Copenhagen Treaty was really about a UN world government rather than saving the planet. He is also highly critical of the UN IPCC climate science. For those that can add 2 and 2 together go to the Greens website and under the "Policies" tab look under "Human rights and democracy" and there you have it "Global governance". Now go out and buy the DVD "Global warming or global governance" and cross your fingers for an early election."

Peter Costello has a sting in the tail of his article:

"But the political left has found marketing itself under the label "Green" has a much better appeal.

They are also taking a lot of support from people who think that Green is a description of environmental policies. It is much more than that. It is a clever marketing label. Beyond the label is a fully formed agenda of radical positions on tax, economics and foreign affairs.It pays to look carefully before buying the product."

What a pity the Coalition didn't campaign against the Greens and expose some of their foibles before the last Election. They might have picked up more of the disgruntled Labor voters.
Posted by Geoff on September 30, 2010 1 comment:

Anthony Cox, Committee Member of The Climate Sceptics (TCS) wrote the following article which appeared in the Newcastle Morning Herald – 29 September 2010 under the Heading:

The effect of this will be increases in the cost of living and a chance that electricity supplies will be interrupted. The planned carbon tax will be a further burden. Rising Tide says this is not enough.

It says the science supporting man-made global warming has been settled. But has it?

The Inter-Academy Council (IAC) made up of leading scientists, recently undertook an appraisal of the Intergovernmental Panel for Climate Change (IPCC), the source of the science on global warming.

The IAC found that nearly half of the reports and conclusions of the IPCC were written by environmental groups that share Rising Tide’s view. The other half were by a small group of scientists who write the IPCC’s Assessment Reports. In short, the IAC found that there was no overwhelming consensus supporting man-made global warming.

The IAC found that the scientific conclusions of the IPCC were not backed up by adequate standards of certainty. This also casts doubt over IPCC predictions.

The scientific basis of global warming has been challenged by five recent peer-reviewed papers.

The first, by Dr Roy Spencer and Danny Braswell, found that instead of reinforcing warming, clouds reduce warming. The IPCC assumes that clouds make warming worse.

The second is by Professor Richard Lindzen. The IPCC assumes carbon dioxide traps heat in the atmosphere and that extra heat acts as a feedback to worsen warming. Professor Lindzen has shown that the amount of energy leaving the atmosphere means there is insufficient energy left for the IPCC’s feedbacks.

The third paper, by Dr Ferenc Miskolczi, a former NASA chief physicist, found that the greenhouse effect has not changed in 60 years of NASA measurement.

The fourth, by Dr Blakely McShane and Dr Abraham Wyner, found that the “hockey-stick” could not be replicated. This supposedly shows temperature over the past 2000 years as unchanging until the 20th century, when it increased rapidly. But they show that it is more likely that times in the past were warmer than today.

Rising Tide’s actions are not justified. The group should stick to legal methods of protest

Why are Climategate Charlatans Stil Free 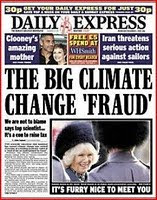 Why Are Climategate Charlatans Still Free? By Alan Caruba

In an excellent column, Alan Caruba has put very succinctly what many of us has thought of Climategate and the follow-up whitewash hearings.

If I had engaged in activities that involved fleecing the governments of the United States and the United Kingdom of billions in public funds in the name of “climate research”, and it was found that I had manipulated the data to advance the “global warming” hoax, wouldn’t I be facing charges of fraud?

Or if the universities for which I worked had benefited from receiving those public funds had conducted hearings that exonerated me, wouldn’t those institutions be considered accessories to the alleged crime?

Alan mentions whitewashes on both sides of the Atlantic, the US EPA's declaration that CO2 is pollution, Al Gore lying under oath....
Read more...

Alan finishes: " There is no reason why those who provided the data underwriting the fraud of Climategate should not face justice. That may not occur, but the truth will be a form of justice despite the loss and waste of billions in both the United States and the United Kingdom."

Australia has wasted millions as well. We have a Department of Climate Change sitting twiddling their thumbs awaiting legislation to give themselves legitimacy and some work to perform.
Posted by Geoff on September 30, 2010 No comments: