As reported by Reuters, as the UK Wind Farms move into deeper waters the move into rougher waters, they move into dangerous waters. Rougher waters mean that the transfer of maintenance personnel from ferrying boats to the wind turbines becomes more dangerous.

Charles Hendry, UK energy minister, is quoted as saying; "As developers seek to get wind turbines into deeper waters, where the wind blows more wildly and the waves are stronger, it is vital that access and safety are maximised and costs minimised."

So Britain's Carbon Trust is launching a competition to find a safer alternative for workers to transfer from service boats onto offshore wind turbines in rough seas.

(I wonder if they are also looking for a safer way to stop avian slaughter.)

Reuters adds: "UK offshore wind power costs have leapt over the past five years, and British consumers will have to foot the bill under a scheme to subsidise many low-carbon technologies until they become competitive."

Meanwhile, Closer to home, financial columnist Terry McCrann, in an article entitled Blowing in the Wind notes an oft used deception re Wind Turbine Output. He starts: "BE AFRAID, be very afraid, of our politicians' desperate infatuation with wind. It is going to cost you billions." 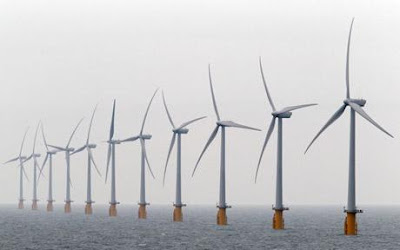 The array of 100 turbines, each the height of the Blackpool Tower is touted to produce 300 MW of electricity, enough to power 200,000 homes. If, of course, the wind is blowing. The government's own statistics showed that the average output of Britain's offshore turbines was only 26 per cent of capacity.
So, cut the homes 'supplied' to barely half the claimed number, according to the Telegraph's Christopher Booker. And the 300 MW to a real 75 MW.
And Christopher Booker points out that over the coming years, the Brits: "will be giving the wind farm's Swedish owners a total of £1.2 billion in subsidies. That same sum, invested now in a single nuclear power station, could yield a staggering 13 times more electricity, with much greater reliability."
Oh, and the jobs created, Booker goes on to mention that Climate Change Secretary, Chris Huhne claims: "that it will create "green jobs" – although the developers say that only 21 of these will be permanent. These are thus costing, in "green subsidies" alone, £3 million per job per year, or £57 million for each job over the next 20 years. The Government gaily prattles about how it wants to create "400,000 green jobs", which on this basis would eventually cost us £22.8 trillion, or 17 times the entire annual output of the UK economy."
Gee, Do you think we should send them Wayne Swan to give them financial advice?