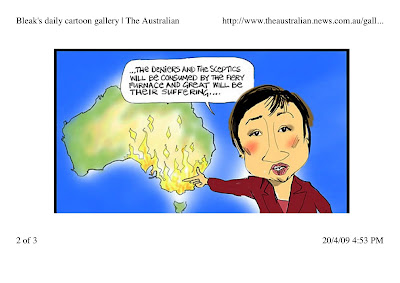 Looks like the first casualty of the Green/Labor government will be Ms Penny Wong. It appears that SA Greens senator Sarah Hanson-Young is not impressed with Ms Wong. Ironic - the party that is pushing for homosexual marraiges is pushing to remove a homosexual senator.

Greens climate change and energy spokesman Christine Milne was the architect of the "climate committee" which replaces Julia Gillard's 150 people picked up from bus stops. According to the broad agreement between the Greens and Labor, they will decide on the mechanism by the end of September.

"Milne’s vision is that it will include representatives from the ALP, the Coalition, the Greens, and the two country independents – Tony Windsor and Rob Oakeshott – who made climate change one of the key considerations for their decision to ditch the rural conservatism of their constituents in favour of the ALP. She also wants a panel of experts – like Ross Garnault, for example – to sit on the committee."

Mind you, this is not going to be an open committee.
"Milne wants the pre-condition of membership of this government committee to be acceptance of the science of human-caused climate change and the need for a carbon price."

Hang on to your hats, folks! Here come rising prices and the end to Australia's prosperity.

From the Climate Spectator:

There is growing speculation in Canberra that Senator Penny Wong will no longer be in the climate change portfolio when the new ministry is announced early next week.

Three names have been suggested as her replacement – Greg Combet, Anthony Albanese and Tony Burke. None of these are particularly contentious, even among the environmental NGOs, although Albanese’s appointment might be coloured by his animosity towards the Greens that nearly unseated him in the latest poll.