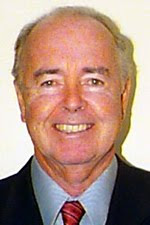 Congrats on your win.

However, I think you need to be more careful with your views on climate change,as they are based on a fraud. I am preparing a Brief for a Class Action ( hopefully to be led by Slater & Gordon) against the Australian Academy of Science and all those like you who go along with their wholly specious claim that there has been ANY global warming since 1900. For example, the Australian Academy of Science's Report’s (August 2010) first graph (Fig. 3.1, p.7) purports to show the “global surface temperature anomalies relative to 1951-1980” from 1850 to 2010 (CRU) or from 1880-2010 (GISS, NCDC). The “anomalies” are mostly negative from 1850 or 1880 until the 1940s, and thereby create the impression from the positive anomalies since the 1970s that there has indeed been “warming” of global surface temperatures. That impression is solely an artefact of the absence of instrumental temperature measurements across most of the globe until the 1940s, above all in the Tropics, and that means the AAS Report’s Fig.3.1 is fraudulent in exactly the same manner as all claims by Bernard Madoff about the financial performance of his investment funds were fraudulent, as he confessed in December 2008. It is especially reprehensible for the authors of the AAC Report not to have checked their sources, as both the NCDC and GISS make no secret of the lack of even as much as 50 per cent global coverage of instrumentally measured surface temperatures before the 1940s, as shown in my Fig.1.1 (available at NCDC), which clearly shows the nearly complete absence of such records across the world’s hot TROPICS before 1950, while the “temperature anomaly” from 1950-1980 in the Report’s Fig.3.1 does include the tropics. That means a deceptive increase in the claimed global surface temperature from the base period of 1950-1980 which includes the tropics through exclusion of the Tropics before 1950. Similarly, the Report’s Fig. 3.2 showing the “anomaly” over the period 2005-2009 excludes perforce instrumental records across much of the higher latitudes, since they have a much reduced coverage (GISS, 2010). In particular, both the former USSR and Canada have a much reduced instrumental temperature coverage of their cooler and higher latitudes since 1990. If you persist with your misguided beliefs in the furphy of "anthropogenic climate change" when there is ZERO evidence for that in the instrumental record since 1850 or 1880, do take take out some professional indemnity insurance, as I fully intend to include you in my Class Action unless I see evidence NOW of a change of heart on your part. BTW, be aware I have given three seminars on all this at ANU since 2008, as you can see at my website. Tim Curtin
www.timcurtin.com
Posted by Geoff on August 27, 2010 No comments:

Wind Power Won't Cool Down the Planet but will kill birds

From the Wall Street Journal 23/8/10 by ROBERT BRYCE

The wind industry has achieved remarkable growth largely due to the claim that it will provide major reductions in carbon dioxide emissions. There's just one problem: It's not true. A slew of recent studies show that wind-generated electricity likely won't result in any reduction in carbon emissions—or that they'll be so small as to be almost meaningless.


Wind Turbines: 'Eco-friendly' - but not to eagles
By Christopher Booker
http://www.telegraph.co.uk/comment/columnists/christopherbooker/7437040/Eco-friendly-but-not-to-eagles.html

n all my scores of items over the years on why the obsession with wind turbines will be seen as one of the major follies of our age, there is one issue I haven’t touched on. The main practical objection to turbines, of course, is that they are useless, producing derisory amounts of electricity at colossal cost. (Yet the Government wants us to spend £100 billion on building thousands more of them which, even were it technically possible, would do virtually nothing to fill the fast-looming 40 per cent gap in our electricity supply.)

A feature of these supposedly environment-friendly machines that I haven’t mentioned, however, is their devastating effect on wildlife, notably on large birds of prey, such as eagles and red kites. Particularly disturbing is the extent to which the disaster has been downplayed by professional bodies, such as the Royal Society for the Protection of Birds in Britain and the Audubon Society in the US, which should be at the forefront of exposing this outrage, but which have often been drawn into a conflict of interest by the large sums of money they derive from the wind industry itself.

The death toll of the "worst environmental disaster in history" pales in comparison to the carnage wrought in the name of environmentalism. For example, the Altamont Pass, Calif., wind farm's cruel blades pulverize 4,700 birds each year, according to the National Audubon Society. Victims of this green power plant include golden eagles, red-tailed hawks, American kestrels and burrowing owls. The windmill industry defends itself by claiming newer turbine blades turn more slowly, making it less likely that Tweety will meet his maker. It may only change the victim. According to a 2008 study of the high-tech wind farm in Judith Gap, Mont., the project's 90 turbines killed fewer birds, 406, but three times as many bats - 1,206.

The impact of the Gulf oil spill on tourism and the fishing and shrimp industries cannot be denied, but the wounds will soon heal. Environmentalism's avian holocaust will continue - 33,000 birds annually, according to a 2002 Fish and Wildlife Service estimate - until government pulls the plug on subsidies for inefficient, unnecessary and deadly windmills.