On Monday Aug 16th at 10 am The Climate Sceptics will announce their Northern Australia Water diversion vision at Berri next to the River Murray.
Several Irrigator groups have been invited to attend the announcement and discuss the idea which Barker Candidate Steve Davies and Senate candidate Leon Ashby will explain.

Leon Ashby says "Australia has one of the world flattest inland landscapes that would lend itself to having the most efficient water diversion scheme in the world - if anti progress Green ideology was overcome."
The environment award winner says: "I lived in North Central Qld for a decade and saw the massive amounts of water that northern rivers have at times. I was runner up for a Qld Landcare research award which moved water gravitationally over a 10,000 acres rather than let it flow down several creeks) It was a mini version of what can be done across Australia."
The Senate candidate says "There are 4 areas in Australia where water diversions should be properly investigated (provided most of the water was used for irrigation and city purposes) which then pays for the scheme.

1) The Clarence River in Northern NSW north of Coffs Harbour (which has flooded 3 times in the last 18 months);

2) The Johnson, Tully, Herbert and Burdekin Rivers dammed up at Hells Gate 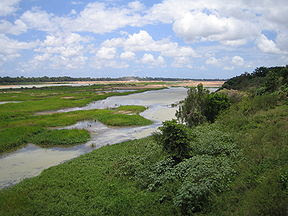 and then run through a tunnel to the western side of the great dividing range. (The cost of the dam was $750 million last time it was researched);

3) A diversion from the Flinders, Normanton and Gilbert Rivers down the west side of the Great dividing range; and

4) A pipeline from Lake Argyle in the Northern Territory across to Qld.

This report was never released!"

Mr Ashby pledged that if elected to the SA Senate he will champion a visionary Northern River diversions system transparently pricing and evaluating each on their cost/ benefit ratio of volume water provided versus setup cost, and built in stages and structured so water and land sold as part of the scheme then paid for the building costs over time.


He concludes "Water could flow via gravity from Hells Gate in North Qld to Murray Bridge or almost anywhere in the Riverina if we desired it.
23% of Australias runoff (in other words 6 times the water in the Murray Darling) flow runs out into the Gulf of Carpentaria each year.
Only 3% of the water in Lake Argyle is used each year. There is oodles of water if we are not brainwashed into the anti progress green ideas."

It is a plan that would stop Riverina farmers losing their water rights and bring greater prosperity to rural communities inland.

Stop Green Carnage - There is a better way
In the Senate - Vote 1 The Climate Sceptics
Posted by Geoff on August 14, 2010 No comments: