A few years ago S Fred Singer and Dennis T Avery wrote a book Unstoppable Global Warming – every 1,500 years It was fairly well reviled by Alarmist blogs at the time. 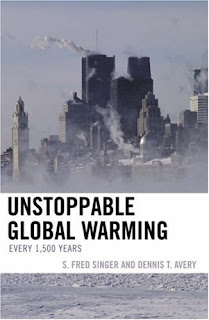 Reading this week on Co2 science, I see that there was a peer-reviewed paper available to the alarmists at the time of publication: http://www.co2science.org/articles/V8/N33/C3.php. This refers to a paper Müller, S., Geyh, M.A., Pross, J. and Bond, G.C. 2005. Cyclic climate fluctuations during the last interglacial in central Europe. Geology 33: 449-452.

What was learned
The results of the authors' analysis revealed the presence of 11 major cold events having an average recurrence time of approximately 1450 years over the course of the last interglacial, which periodicity is essentially identical to the millennial-scale oscillation of climate throughout the current interglacial (Bond et al., 1997, 2001; deMenocal et al., 2000; McDermott et al., 2001; Gupta et al., 2003; Hu et al., 2003), as well as the similar oscillation that has been documented throughout interglacial and glacial periods alike over the past half-million years (McManus et al., 1999) and the equivalent oscillation that persisted even before the development of the large 100,000-year ice sheets characteristic of the late Pleistocene (Raymo et al., 1998). As for the cause of the 1450-yr cycle reported by Müller et al., the authors have no definitive answer, but suggest that it may ultimately be the product of variations in solar activity.

What it means
This study adds to the growing body of evidence that earth's climate oscillates in a well-defined manner on a timescale of approximately 1500 years. This knowledge is very important, for it suggests that something other than the historic buildup of carbon dioxide in the atmosphere may be responsible for 20th-century warming, the timing of which fits nicely with the prior history of this oscillation. Indeed, there is absolutely no evidence for any concomitant oscillation in the air's CO2 content accompanying the 1500-year oscillation of climate that was responsible for the warmings that produced the prior Medieval Warm Period and the still earlier Roman Warm Period, nor is there any evidence for such a CO2 oscillation accompanying any of the similar warmings of the penultimate interglacial or the other interglacial and glacial periods through which this persistent oscillation of climate has been documented to occur as far back in time as scientists have been able to peer.
Posted by Geoff on July 11, 2010 No comments: