Great Big Carbon Tax Back on the Labor Agenda

Julia Gillard put the Carbon Tax back on the agenda last night on the 7:30 report with Kerry O'Brian: 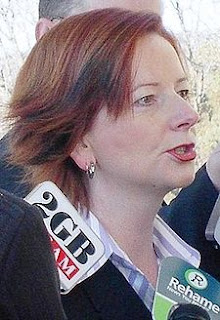 First she promised to go to the polls soon.

JULIA GILLARD: Kerry, I can absolutely rule out next year. The election will be in 2010.

KERRY O'BRIEN: Very briefly, on climate change you have said you will reprosecute the case for a carbon price as global economic conditions improve and as the Australian economy continues to strengthen. That’s what you have said. That sound to me like you are still wedded to the same timetable for an emissions trading scheme that got Kevin Rudd into hot water in the first place. So your leadership on that crucial issue will make no difference?

JULIA GILLARD: My leadership will be about talking to the Australian people about climate change.

I believe climate change is real.

Well, Julia, I believe also that Climate Change is real. Climate has changed from the beginnng of time.

JG:I believe that it is caused by human activity.

Julia, I believe that man can affect climate. The urban heat island affect proves this. That, though Julia, is LOCAL climate. Global Climate is out of man's hands.

JG: I believe that we have got to therefore change the way we do things and that this nation will in the future need a price on carbon.

For what good it is, Jules, we have carbon (dioxide) trading exchanges now! They put a price on carbon for you. Mind you, there has been some rorting, so caveat emptor.

JG: I also believe that if we are to have a price on carbon and do all the things necessary for our economy and our society to adjust we need a deep and lasting community consensus about that. We don’t have it now.

That’s why I said today if elected as Prime Minister at the forthcoming election then I will take the time to reprosecute the case with the Australian community to develop that deep and lasting consensus. In the meantime of course there are steps we can take to address climate change, including better harnessing the great renewable resources of this land - solar and wind.

Again, beware. Will you be able to create enough power with these "great renewable resources....solar and wind?" The people will get pretty angry when their power is taken from them. Australians are fairly complacent but sitting in the dark cooking on candles will not make happy voters!


KERRY O'BRIEN: But what you are making clear is no change on the ETS before the election.


Hey, Kerry, she is trying to dodge the "GREAT BIG NEW TAX" as an election issue, but wants to claim a mandate after the election.
Posted by Geoff on June 25, 2010 1 comment: