Around 130 turned out to on a lovely balmy Melbourne winter’s day to hear visiting American meteorologist Anthony Watts speak on climate change. Mr Watts is a meteorologist with over 24 years in weather forecasting in the USA. He operates a weather technology business and runs one of the most popular science blogs on climate change on the internet (http://www.wattsupwiththat.com). Last year his website had over 46 million visitors.

The purpose of Mr Watts visit was to present advance results of his surface stations project to photographically survey every one of the 1221 USHCN stations in the USA. His conclusions were startling –the official temperature record is unreliable. 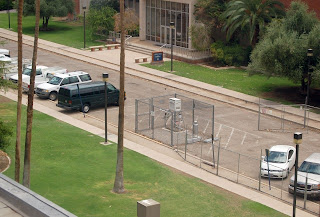 Mr Watts started his address by saying he was years ago, really into green activism. He brought an electric car, installed solar panels on his roof, put timers on his lights, all in the name of conserving energy and reducing his carbon footprint. He even campaigned on various environment issues and spoke to all who would listen about these things.

So what changed his opinion? In speaking to others, particularly Jim Goodridge a climatologist, he became aware of a seemingly irrelevant piece of information that had enormous ramifications for collecting weather data.

He found that the National Weather Service who collected data collection points called `Stevenson Screens’, had over the course of a relatively small time, changed the painting scheme of these boxes which recorded data. Once all such boxes were painted in whitewash, now all these recording stations housed in boxes were painted in semi-gloss latex paint.

This stems from the fact that when the Weather Bureau commissioned the design in 1892, whitewash was specified. But whitewash is no longer commonly available, and the National Weather Service changed the specification in 1979 to be semi-gloss latex paint.

When Mr Watts checked the data records of NOAA, he discovered a curious thing. Since the boxes were painted in Latex, temperatures had risen by about 1 degree. He also noticed that there was a variance on about 1 degree between city readings and those taken in the country away from large population areas. So he decided to conduct a simple preliminary experiment to give him guidance on a hypothesis - `that changes in paint on Stevenson Screens over time make a measurable difference on the temperatures recorded inside them.’

So he made 3 duplicates of the recording station boxes and painted one in whitewash, one in semi-gloss latex, and left one unpainted and took readings over 3 months. The experiment revealed that the box coated in semi-gloss latex recorded data around 1 degree warmer than the whitewashed box.

Mr Watts then concentrated on studying the location of these Stevenson Screens. He was staggered to find most of them were located at airports – right next to the runway! He also found that others were placed in close proximity to buildings, air conditioners, freeways and affluent treatment plants. Most recordings conducted in the city were influenced to varying degrees by the `heat island effect’ (radiated heat - warm air radiated from buildings, motorways and the application of commercial and industrial use of electrical machinery and appliances.)

Mr Watts found that data collected in the country showed no such increase although there was a slight upward trend. He also found that the practice of US authorities was mirrored by other western nations with monitoring stations placed in very dubious locations. A colleague inNorway conducted a small experiment to see if there was a radiated heat island effect. He chose a level piece of local coastline and drove between two designated points over a number of days. He took measurements along the way and made a startling discovery. Temperatures did not vary much between county and the small towns he passed thought, but when he reached the Airport and took readings there, he found that readings there were constantly higher than those recorded elsewhere on his journey.

Mr Watts said that when he raised the issues of the location of the monitoring devices with authorities, they did listen and stopped using some of them. What was of concern to him was that the corrupted data collected prior to the discontinuation of collecting data from a badly located monitoring device, was still left intact in the record, thus distorting any conclusions which would be reached as the result of using such data.

Mr Watts concluded by saying that the science is all about the data and the integrity of methods used in collecting such data. He also stressed those concerned about climate change issues, needed to be vigilant and to expose bad and dodgy science as there was much at stake.

Prior to Mr Watts addressing the meeting, Climate Sceptics Party President Leon Ashby spoke briefly on how the implementation of green policies had severely impacted on his farming business and his ability to maintain high productivity on his land.

He was follow by an excellent presentation by David Archibald, an Australian scientist who operates in the fields of climate science and cancer research, and the author of “Solar Cycle 24: Why the world will continue cooling and why carbon dioxide won’t make a detectable difference”.

Many good points were raised by this erudite speaker, but the one that caught my attention was the graph on the concentration of CO2 in the atmosphere. Between 20ppm and 50ppm, CO reaches its maximum impact on climate, and its influence gradually tappers off to virtually no influence at 100ppm. (The current atmospheric concentration of CO2 is just under 390ppm.) Mr Archibald said it’s something like putting salt in soup, once the saltiness reaches a certain level you notice it, but after that no matter what the level of salt, it still tastes salty . Hence one can conclude that CO2 is not driving climate change.