David Archibald, touring this month with Anthony Watts (see http://www.climatesceptics.com.au/watts.html for details) has an article in Quadrant on line. It is an extract from his latest book "The Past and Future of Climate." 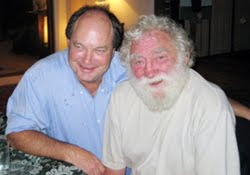 
Edited extract: "Why did so many scientists get it wrong?"

If the data and forecasts in this book are correct, then the Intergovernmental Panel on Climate Change (IPCC), the National Academy of Sciences in the United States, the Royal Society in the United Kingdom, the Bureau of Meteorology and the CSIRO in Australia are all wrong. How can this be? Firstly, there aren’t that many scientists involved in the IPCC deliberations. The inner core is possibly twenty souls. Secondly, they were untroubled by the necessity to concoct fraudulent data to get their desired results. The only unknown question regarding the IPCC scientists is “Did they actually believe in the global warming that they were promoting?”

http://www.davidarchibald.info/
Posted by Geoff on June 05, 2010 No comments: