"Weekend at Bernies" phase for man made Global warming 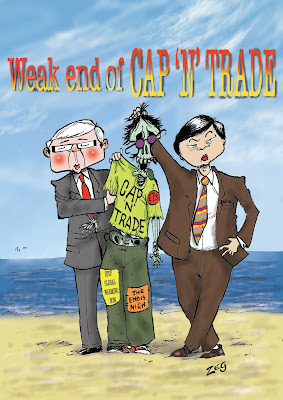 Letter to the editor

"Weekend at Bernies" phase for man made Global warming


Sir / Madam,
The way the theory of man made global warming is still being believed by many is similar to the movie "Weekend at Bernies" This is where a corpse is carted around and people react to the dead body as if it were alive.
Funnily enough green groups and governments are still saying the theory of Man made global warming idea is alive, but there are now three reasons it is dead and it will stink more and more in the future.

1) No scientist has verifiable evidence that CO2 causes dangerous Global warming. (If I am incorrect my opponents just need to quote the scientist and the paper - but of course there is none.)

2) Many IPCC scientists and employees are being exposed in corrupting the climate science effects by making hugely exaggerated claims - direct evidence the theory is a sham.

3) Ex-NASA Scientist (Dr Ference Miskolczi) has calculated the Greenhouse effect and these calculations demonstrates CO2 cannot cause Dangerous Global warming.
His 2004 peer reviewed paper has not been refuted and is supported by several other publications (e.g. Kiehl & Ramanathan 2006)

The climate sceptics TV and Radio ads for the SA election mention Miskolczi's work and that we in SA have been conned and are wasting millions of dollars on a NON EXISTANT problem. A vote for the Climate Sceptics will help bury the exaggerated theory. We stand for "Truth before Politics" and we are centrist independent thinkers on all issues. If elected, we will be the sharp thinkers challenging legislation that reduces people rights or is not based on the best science or is not properly thought through.