Get the U.N. Out of the Climate Business

The Mankato Free Press from Mankato MN has an opinion piece today by Mark Friedman entitled: "Climate skeptics ignore weight of evidence." Referring to a previous opinion piece by Darryl Biehn, he writes:
"He has done research, but evidently from biased sources. What do scientists in the field who really know the debates have to say? According to that radical lefty rag The Wall Street Journal, Dec. 7 edition, a survey of 3,000 earth scientists found that 82 percent agree that human activity is “a significant contributing factor” in rising temperatures. Among those who actively publish in the field, 97 percent agree. Yes, there can be conformity in science, but to pressure scientists to come to an unacceptable conclusion is much like herding cats.

Well, Mark, Science isn't about numbers, science is about testing and proving or disproving an hypothesis:

The scientific method has evolved over many centuries and has now come to be described in terms of a well-recognized and well-defined series of steps. First, information, or data, is gathered by careful observation of the phenomenon being studied. On the basis of that information a preliminary generalization, or hypothesis, is formed, usually by inductive reasoning, and this in turn leads by deductive logic to a number of implications that may be tested by further observations and experiments (see induction; deduction). If the conclusions drawn from the original hypothesis successfully meet all these tests, the hypothesis becomes accepted as a scientific theory or law; if additional facts are in disagreement with the hypothesis, it may be modified or discarded in favor of a new hypothesis, which is then subjected to further tests. Even an accepted theory may eventually be overthrown if enough contradictory evidence is found, as in the case of Newtonian mechanics, which was shown after more than two centuries of acceptance to be an approximation valid only for speeds much less than that of light.

If it was a pure numbers thing, petitionproject.org would say we see your 3,000 scientists and raise you by 30,000. 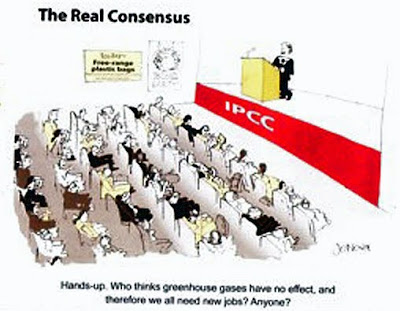 Cartoon from Joanne Nova's Climate Skeptics Handbook - Hands Up Who thinks greenhouse gases have no effect and therefore we all need new jobs? Anyone?

Mark goes on to say:

I do not have space to address scientific issues brought up, such as whether warming happens before or after carbon (dioxide) increases, or the solar cycle hypothesis.

Well, Mark, one of the big scenes in Al Gore's award-winning Movie "33 Inconvenient Untruths" is where he shows two graphs, one above the other and says: "Do these graphs
go together? ...It's complicated!"

And Complicated it was, because, if he had shown the two graphs together, we would have seen the proof that warming happens before the increase of Carbon Dioxide.

Incidently, Mark, your aforementioned lefty rag, The Wall Street Journal (link in title), on the same day you published your opinion piece, published:

In the aftermath of the Copenhagen Climate conference, it is clear that the United Nations-driven process is a bust, and that any similar process requiring economic suicide and massive wealth transfers will go nowhere. It is long since time to drop this charade, take the question of climate change out of the hands of the U.N., and implement more reasonable policies.