Professor Carter will address a meeting at Newcastle's South's Leagues Club on 22/10/09 at 1pm,

Emissions trading will hurt the poor, damage the environment, invites fraud and is economically irresponsible.

Well, there's another fraud! The three Moistketeers, Rudd, Wong and Sackett tell us that there is consensus on climate change (their deceptive term for man-made global warming.)

If there is consensus, there's no need for more scientific funding for global warming projects!. So, let's ask them to pull any global warming research or experimental money out of the budget.

“Man-made Global Warming does not Exist”.

The truth is emerging – there is not a scrap of evidence that man-made carbon dioxide causes global warming. The IPCC has been devious and incompetent. Australia should boycott all further IPCC meetings and withhold future funding.

A mere 20,000 years ago, massive ice sheets covered much of the earth. The sparse population led a cold hungry existence.

Then, just 12,000 years ago, and there was dramatic natural global warming - ice sheets melted, sea levels rose and the warming seas expelled carbon dioxide. The warmth and increased carbon dioxide plant food in the atmosphere encouraged the spread of grasslands, forests and animal and human populations over lands once covered by thick, barren sheets of ice.

None of these dramatic changes were caused by emissions from the camp fires of the Cave Men.

Since then earth has experienced see-saw heating and cooling. The most recent warming phase started at the depth of the Little Ice Age about 300 years ago. There were no coal-burning steam engines, no oil-burning combustion engines and no cement plants, but still the planet warmed up.

Climate fluctuations continue in recent times, but not in step with man’s carbon dioxide emissions.

When industry declined in the Great Depression of the 1930s, CO2 emissions fell but temperatures rose to a peak.

Then during the immediate post war boom in industry, emissions soared but temperatures fell and there were fears of a new ice age starting.

Now, since the start of the new century, with emissions from China and India growing strongly, world temperatures are again steady or falling.

The message is there for those prepared to read – man’s production of carbon dioxide does not control world temperature.

In Australia, many long term temperature records show that for the last century rural temperatures were stable or falling, but temperatures recorded in the big cities show slight warming. There is ZERO global warming of the atmosphere, just a bit of urban heating near big cities. This heating is caused, not by carbon dioxide in the atmosphere, but by heat generated from increasing urban human activities – heaters, appliances, air-conditioners, cars, trains, planes, concrete and bitumen all pumping new heat into the air. And the temperature measuring spots that were once in bushy outer suburbs are now surrounded by cars, concrete and airports.

This urban heat causes hot air to rise, may generate a storm or two, and the heat is lost harmlessly to space.

Here is a picture of “global warming” in Winton, outback Queensland:

For more records from rural Australia, and one for Sydney see:
http://carbon-sense.com/2009/08/15/isolated-australian-temperatures/

For the non-warming evident in the longest continuous temperature record in the world, see:
http://carbon-sense.com/2009/10/01/british-record/

For the IPCC and its local lap-dog, the CSIRO, to continue promoting the man- made global warming scare in the face of clear contrary evidence is grossly improper and should be subject to independent review.

For a fuller report on the dishonesty and incompetence of the IPCC see:
http://www.financialpost.com/story-printer.html?id=2048347

Man-made global warming does not exist. Both the IPCC and the CSIRO should be challenged to justify their reckless and baseless climate scare-mongering.

Viv Forbes
www.carbon-sense.com
Posted by Geoff on October 05, 2009 No comments:

The ETS - a consumption tax on everything 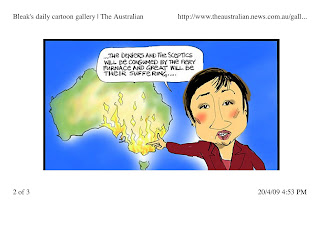 I was thinking the other day about the ETS. In case you don't know, it stands for Emissions Trading System - although it has been called, inter alia, Extra Tax Syphoning. It's meant to be the action section of the CPRS. So what's CPRS, you say?

Well, it's the highly deceptively named Carbon Pollution Reduction Scheme. So, why deceptive, you say? Well, the carbon refered to is actually Carbon Dioxide - CO2.

Carbon is used deceptively to make you think of black sooty coal. Do you know that Diamonds are almost pure carbon. Do you know that CO2 is colourless, tasteless and vitally essential to life? Why do the Newspapers and the TV show water vapour or steam coming from cooling towers when the talk about CO2 pollution?

Well, what is atmospheric pollution? From the NSW Government Department of Health: Air pollution occurs when the air is affected by chemicals or particles that are not normally present and have the potential to affect health.

Carbon Dioxide is definitely normally present in air. As to the potential to affect health, well. yes, it does, but beneficially.

I was thinking: "Do these clowns think?" Does Malcolm Turnbull think? Does Penny Wong think?
Even if you accept the "CO2 causes global warming" hypothesis; how can a tax on Carbon Dioxide reduce atmospheric CO2.

In the old days, budget day headlines were inevitably "Beer UP! Cigs UP!"

However, some clever pollies decided to CPI the tax on alcohol and tobacco and so, every three months there is a sneaky tax grab and you go to the lifeline sorry grog shop and find that there has been a hike in your favourite tipple. You shrug and buy it! Smokers must find the same thing.

I normally buy quality wines - 10 years ago at $9 a bottle! and to give you an idea, here's what's happen to my quality wine.

So, I still buy my tipple. Why wIll the ETS - a consumption tax on almost everything - reduce CO2 emissions?

The alcopops tax farce proved that the tax did little to reduce usage - just made some people smarter - a bottle of vodka and a bottle of Fanta - instant alcopop!