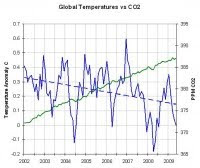 From Nepal's "Himal" October Edition: "Journalists are cynical by nature, and it is perhaps understandable that some in India continue to retain a certain degree of scepticism about climate change – over whether it is truly taking place, being exaggerated or, worse still, whether it is little more than a conspiracy concocted by a handful of vested interests for unclear purposes."
However, it appears the Australian journalists have accepted only one side of the man-made global warming (AGW) debate incorrectly called "consensus." The "consensus" is from scientists on the public purse whose jobs and grants would disappear if the AGW hypothesis was proven to be false.
Senator Fielding asked simple questions of Senator Wong. She and her scientific advisors could not give answers. The political body IPCC which was formed to show that CO2 causes AGW have failed and in recent correspondence say that they rely on the US Environmental Protection Agency naming CO2 a pollutant.
The EPA's Head, Mr Al McGartland, says he is managing the issue on PROBABILITY. Mr McGartland offers no science that proves that CO2 is a pollutant. His case is founded on computer modelling that have been proven to beflawed.
Nepal can recognise the job of journalists. Where are our investigative journalists?