The U.S. Chamber of Commerce, trying to ward off potentially sweeping federal emissions regulations, is pushing the Environmental Protection Agency (EPA) to hold a rare public hearing on the scientific evidence for man-made climate change.

Chamber officials say it would be "the Scopes monkey trial of the 21st century" -- complete with witnesses, cross-examinations and a judge who would rule, essentially, on whether humans are warming the planet to dangerous effect.

The US Chamber of Commerce represents 3 million large and small businesses. The article also mentions that if the EPA denies the request, then the Chamber plans to take the fight to federal court.

At last a representative body challenging the 'sham science' unlike our farm bodies, or people like Heather Ridout of the Australian Industry Group who falls into line behind Mr Rudd. Also unlike our mining unions who should be defending the jobs of miners.

And after that...the treason trials?
Posted by Geoff on August 25, 2009 No comments:

Costs of the ETS 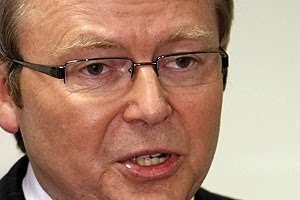 It Wants Your Wallet! Beware the Cap and Trade (Same as our ETS) Monster
Stephen Bloom writes:

Those promoting cap-and-trade use feel-good clichés about environmental sustainability, green jobs and green energy, and a prosperously pristine planet. They try to paint an appealing picture. Even the name of their legislation, The American Clean Energy and Security Act of 2009, sounds noble and patriotic. But behind their persuasive imagery is a destructive economic reality.

In fact, one very prominent cap-and-trade advocate did recently go on record describing the pain his plan would inflict on American consumers. His name? Barack Obama, then a U.S. Senator, in January of last year. Listen to the words of his chilling warning: "Under my plan of a cap-and-trade system, electricity rates would necessarily skyrocket. Even regardless of what I say about whether coal is good or bad. Because I'm capping greenhouse gases, coal power plants, you know, natural gas, you name it — whatever the plants were, whatever the industry was, they would have to retrofit their operations. That will cost money. They will pass that money on to consumers."


Well, at least back then, Barack honestly disclosed some of the pain. He didn't talk about the flow-on costs of an ETS.

Our Mr Rudd and also Mr Turnbull do not talk about the pain they are going to inflict on Australia.

Back to the article:

Under cap-and-trade, prices of gas and electricity and everything else we make through carbon-emitting industries are pushed up (way up) on purpose, so you will consume less. Under cap-and-trade, you will drive less, use less electricity, and get less of most everything else, all while paying more. In short, you and most other Americans will be poorer.

The impact of cap-and-trade will be devastating for individuals and potentially catastrophic for our nation's already troubled economy. Leading economic number-cruncher William W. Beach, Director of the Heritage Foundation's Center for Data Analysis, foresees grim results. "Inflicting a strong cap-and-trade law on our sickly economy would be like throwing an anemic flu patient into a pool of blood-sucking leeches," warns Beach, "The prognosis for recovery would be dim."
Posted by Geoff on August 25, 2009 No comments: