Give Glenn Milne a Humane End 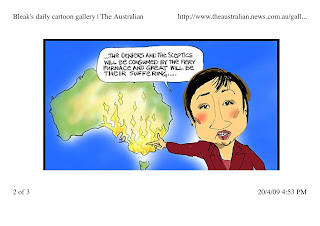 From an Editorial by Glenn Milne in the Sunday Telegraph today (26/7/09) - headline: "Give (wilson) Tuckey a humane end."

Glenn, It all comes down to whether some-one is a politician or a statesman.


Climate Change Minister Penny Wong could not justify her government's stance. Glenn Milne paints Tuckey as some-one who has lost it, but Tuckey is supporting the opinion of his constituents whilst Malcolm is voting for Liberal Party (and possibly his own financial) interests. (See Previous post:

Will Malcolm Turnbull profit from an Emissions Trading Scheme?)

As Glenn Milne pointed out an ETS will cause job losses. It will also cause businesses to move offshore and – according to Frontier Economics – will cost each household $4550 per annum.

The Warmists say we are approaching a tipping point. They are right!

We are near financial tipping point. For the good of Australia, we need to reject the ETS.
Posted by Geoff on July 26, 2009 No comments: