Posted by Geoff on December 17, 2009
Lord Monckton in Australia

Viscount Monckton of Brenchley, Christopher Lord Monckton has agreed to come on a lecture tour in Australia in late January 2010. Professor Ian Plimer will accompany Christopher Monckton on a whirlwind tour of the mainland capital cities starting in Sydney on January 26th and finishing in Perth on February 8th. Unfortunately we cannot fit in Tasmania and the Northern Territory. Lady Juliet Monckton will come as well, in part to monitor Lord Monckton’s health. 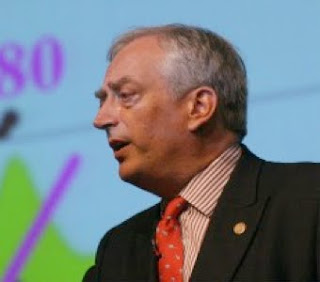 Prof. Plimer says the following of Lord Monckton: “although I modestly state that I am a good performer, he is superb and I have seen him fielding a very hostile BBC and other networks. He has the ability to change thinking……”.

Given the now generally- acknowledged lack of understanding among the Australian general public of the underlying reasons for a “Carbon Pollution Reduction Scheme” and the likely effects thereof, it is critical that the public gets a chance to hear a globally-recognised presenter to explain the rational understanding of the whole issue. Lord Monckton is the ideal person to carry out this task and to also put it to the mass media.

The itinerary is still to be detailed, but what has been agreed with Lord and Lady Monckton so far is:

As you can understand, the cost of this exercise will be very substantial as we have to (and from) fly Lord Monkton to Australia, all his domestic travel and accommodation plus a “stipend” of $20,000. Our aim is to cover these costs from donations from individuals, appropriate associations and corporations; we expect the required total to be of the order of $100,000. We would like to keep the cost of admission to Monckton’s lectures at around $20 so as to maximise the number of people that will come to hear him.

We have had a number of offers of the order of $1,000 and would prefer donations to be of that order, but of course any amount is very welcome. Should there be a surplus, this, depending on the amount, will be given to Lord Monckton and/or the Climate Sceptics Party which is assisting with this project.

Thank you in advance for your support of this nationally important project.