Mr Di-Aping said he had high expectations of Mr Rudd, but claimed that throughout the negotiations the Australian Government has not matched its actions with its rhetoric. 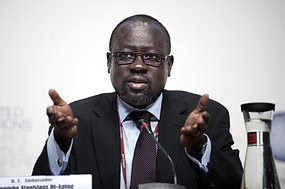 "The message Kevin Rudd is giving to his people, his citizens, is a fabrication, it's fiction," he said.

"It does not relate to the facts because his actions are climate change scepticism in action.

Later, they quote the Governor of California:

In Copenhagen, Governor of California Arnold Schwarzenegger told delegates that leaders and ministers will not be able to find a solution on their own.

"They need to co-operation (sic) the activists, the scientists, the universities," he said.


Tuesday morning on Good Morning America Governor Schwarzenegger said that people were saying "fix the economy first." Arnie was saying you can do both. Like California, Mr President? The greenest state is the brokest state!

The Courier Mail picked up the same story

Mr Rudd arrives in Copenhagen tonight and will argue for rules that allow polluters to grow but force all countries to be held accountable for their greenhouse gas emissions but he is expected to encounter tough opposition.

China and the United States are the world's two biggest carbon (dioxide) emitters.

What this story doesn't tell you is that the US is one of the Developed countries, whereas China is described as a LDC (Less Developed Country) so, although China is now the biggest emitter of CO2 and the US comes in at No 2, the US will have to pay compensation to the LDCs including China!
5AA. Cop15 California D-Aping Kevin Rudd Schwarzenegger