...Australia has one of the highest per capita carbon emissions in the world and has been suffering from an extended drought, probably related to global warming. 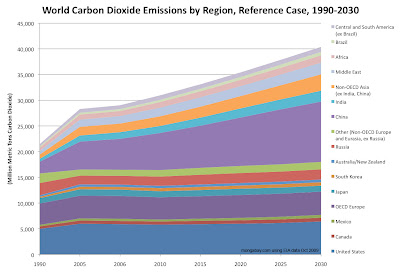 (Click on above graph to see how small Australia's contribution is.)

or, more likely related to ENSO.Australia has one of the lowest per square kilometre carbon dioxide emissions in the world.

Good, too, because, despite those unpleasant facts just days before Copenhagen, the Australian Senate rejected an ambitious emission-trading scheme (ETS) designed to cut pollution by making emitters pay.

Perhaps, Philip, the ETS was a scheme that would have enriched derivative brokers, a scheme open to fraudulent transactions bot a scheme that woud have done nothing to reduce carbon dioxide emissions.

Philip goes on to talk about emissions cuts around the world.

Philip, can you point to one bit of evidence that shows CO2 to be the cause of warming?
Is a few degrees of warming a bad thing?
Are you sure it is still warming?