Is Kevin Rudd a liar or a fool

I have previously asked was Kevin Rudd a traitor? Will he sign away our sovereignty by signing the COP15 treaty.

Now I ask, is Kevin Rudd monumentally incompetant or a liar?

During his Media blitz last week, he spoke to Adelaide radio 5AA's Leon Byner that he hadn't read the draft treaty.

Here is this man who has been appointed a "friend" of COP15. This will mean he will act at Copenhagen to get other nations to sign the treaty. He wants us to believe that he hasn't read it.

Believe it or not! There is an extract of Leon Byner's interview in this discussion between 2GB's Alan Jones and Andrew Bolt.

While we're at it, listen to Minister Wong contradict herself in the following 4BC interview with Michael Smith:

http://www.4bc.com.au/displayPopUpPlayerAction.action?&url=http://media.mytalk.com.au/stuff/pwong.mp3
Posted by Geoff on November 12, 2009 No comments:

Is Kevin Rudd a traitor(2)?

David Evans has written a letter to Mr K Rudd that begins:

The banks want us to trade carbon.

The big financial institutions saw you coming, didn't they? Make you feel all important and “progressive”, save the planet, lead the move to save humanity from disaster. No you patsy, they are just taking Australia's sovereignty and locking in a profitable carbon trading scheme for themselves. A world “emissions” currency manufactured from thin air, world government, and worldwide wealth redistribution based on imaginary carbon “crimes”. There will be no escape.

You are rushing to sign away our wealth and impoverish us, because you wouldn't take a couple of hours to understand the science of global warming and it's weak points. You never audited it did you? Just jumped into the scam feet first. “Oh, all those people said it was right”, you smirk, “and those who don’t believe are so…evil and inferior!” That's the thing about scams Kevin, they always rush you so you don't have time to check it out properly, you just have to get in right away. All those admirers telling you how smart and compassionate you are, for swallowing an unaudited tale about wind and clouds, invisible trace gases, and will-o-the-wisps

Now, I think that David is giving Kevin the benefit of the doubt when he intimates that Mr Rudd doesn't realise that he is signing away Australia's sovereignty. As a Fabian, I think Mr Rudd is fully aware of what he is doing. The left's ideal of World Government could come true at Copenhagen. Even if some of the major Western Governments don't sign, the less developed countries will want to sign on because they have been promised billions of "guilt money" from the countries that have been "carbon (dioxide) polluting for years.

The rest of David Evans' letter:

Smartest man in the ALP, but you cannot understand what the “boneheads” in the National Party already know? The alarmist theory is based on an assumption made in 1984, when there was insufficient data. The chronology is important. That assumption was disproved beyond reasonable doubt in 1999, after the IPCC had been set up, Kyoto was signed, a huge bureaucracy was in place to deal with carbon emissions, carbon trading plans were hatched, and the western climate establishment was lavishly spending billions looking to blame carbon dioxide for global warming. Too much at stake for the bureaucracy and government scientists to turn back. Hence the fracas.

Here’s a clue Kev, find out about “feedbacks”, especially those involving water—clouds, water vapor, humidity, evaporation, rain, and so on. How does the Earth respond when it is warmed a little by our carbon dioxide? Does the Earth amplify the warming, tripling it due to water feedbacks as the carbon dioxide theory claims? Or does it dampen the warming, as any stable system would do, as recent radiosonde and satellite data indicate?

But the banks want carbon trading. Carbon emissions will be the biggest “commodity” market soon, bigger than oil. Carbon traders will trade back and forth, creaming off a few percent on all those government issued permits created out of thin air, and the rest of us will be compelled to pay for them. Brilliant Kev! Why not a carbon tax if you justwant to reduce carbon emissions?
And it's no use asking shiny-pants over in the opposition, because he used to be head of Goldman Sachs in Australia. No wonder he wants carbon trading.

PS Find out the basic numbers that show the global warming agenda is driven by financial interests:
scienceandpublicpolicy.org/images/stories/papers/originals/climate_money.pdf

The money behind trading carbon emission permits will be colossal. The proposed system bears remarkable similarity to the paper money system: permits are manufactured out of nothing, given value by government decree, traded at a profit by big banks, and then the rest of us are compelled to pay for them. The same sort of game by the same people.

The assumption that was made prior to 1984, about feedbacks, that provides two thirds of the warming in climate models, but which was shown beyond reasonable doubt to be false by 2000:

The future of climate is bogus statistics to justify emission trading, taxes, and world government, and it has already started (see photos):

The global temperature rises and falls in cycles of a bit less than thirty years, and has done since the dawn of time. We had cooling from 1940 to 1975, and there were cries of global cooling in the mid 70’s. We had warming from 1975 to about 2002, and there were cries of global warming. Looks like we’ve started the next cooling phase, to about 2030. Aren’t the politicians who inflict carbon reduction on the voters going to look like chumps as the temperatures goes down naturally for the next two decades?

More about the missing hotspot, the lack of evidence for the idea that carbon dioxide caused most of the recent global warming, and about the author at sciencespeak.com.
Posted by Geoff on November 11, 2009 No comments:

Is Kevin Rudd a traitor?

Listen to Lord Christopher Monckton in the above youtube. Copenhagen has a treaty, which, if signed, will erase Australia's sovereignty and that right will be usurped by a World Government.

A sovereign state is often described as one that is free and independent. In its internal affairs it has undivided jurisdiction over all persons and property within its territory. It claims the right to regulate its economic life without regard for its neighbors and to increase armaments without limit. No other nation may rightfully interfere in its domestic affairs. 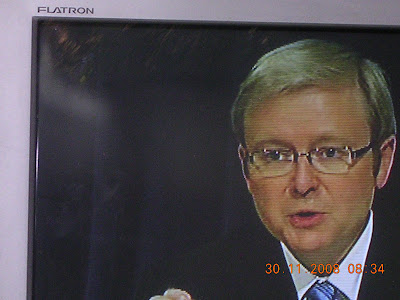 There are strong indications that Mr Rudd wants to be Head of this world government. It has been said by the warmistas that we are at a tipping point! We truly are, but not the way that they say.
As Lord Monckton says, it is almost midnight. Don't let tomorrow dawn on our loss of sovereignty. Don't let Mr Rudd sell our nation down the river. Write to your representative; tell your neighbours, go to the window, open it and yell: I'm sick and tired of this and I'm not going to take it anymore!

Lord Monckton appeared on the US Glen Beck programme and explained about more of the Copenhagen treaty:

They are going to close down the free market -par 36 of annex 1.

They are going to take a tax of 2% on every financial transaction in the Annex 1 (ie major world) countries. 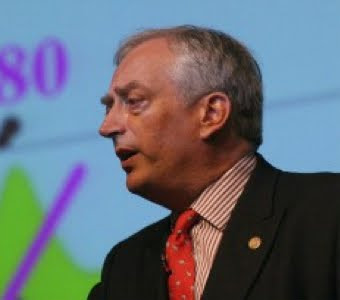 Courtesy of Anthony Watt's great blog "Watt's up with that?" here is a complete transcript of the last part of Lord Monckton's address at Bethel University in St. Paul, Minnesota:-

At [the 2009 United Nations Climate Change Conference in] Copenhagen, this December, weeks away, a treaty will be signed. Your president will sign it. Most of the third world countries will sign it, because they think they’re going to get money out of it. Most of the left-wing regime from the European Union will rubber stamp it. Virtually nobody won’t sign it.
I read that treaty. And what it says is this, that a world government is going to be created. The word “government” actually appears as the first of three purposes of the new entity. The second purpose is the transfer of wealth from the countries of the West to third world countries, in satisfication of what is called, coyly, “climate debt” – because we’ve been burning CO2 and they haven’t. We’ve been screwing up the climate and they haven’t. And the third purpose of this new entity, this government, is enforcement.
How many of you think that the word “election” or “democracy” or “vote” or “ballot” occurs anywhere in the 200 pages of that treaty? Quite right, it doesn’t appear once. So, at last, the communists who piled out of the Berlin Wall and into the environmental movement, who took over Greenpeace so that my friends who funded it left within a year, because [the communists] captured it – Now the apotheosis as at hand. They are about to impose a communist world government on the world. You have a president who has very strong sympathies with that point of view. He’s going to sign it. He’ll sign anything. He’s a Nobel Peace Prize [winner]; of course he’ll sign it.
[laughter]
And the trouble is this; if that treaty is signed, if your Constitution says that it takes precedence over your Constitution (sic), and you can’t resign from that treaty unless you get agreement from all the other state parties – And because you’ll be the biggest paying country, they’re not going to let you out of it.
So, thank you, America. You were the beacon of freedom to the world. It is a privilege merely to stand on this soil of freedom while it is still free. But, in the next few weeks, unless you stop it, your president will sign your freedom, your democracy, and your humanity away forever. And neither you nor any subsequent government you may elect will have any power whatsoever to take it back. That is how serious it is. I’ve read the treaty. I’ve seen this stuff about [world] government and climate debt and enforcement. They are going to do this to you whether you like it or not.
But I think it is here, here in your great nation, which I so love and I so admire – it is here that perhaps, at this eleventh hour, at the fifty-ninth minute and fifty-ninth second, you will rise up and you will stop your president from signing that dreadful treaty, that purposeless treaty. For there is no problem with climate and, even if there were, an economic treaty does nothing to [help] it.
So I end by saying to you the words that Winston Churchill addressed to your president in the darkest hour before the dawn of freedom in the Second World War. He quoted from your great poet Longfellow:
Sail on, O Ship of State!
Sail on, O Union, strong and great!
Humanity with all its fears,
With all the hopes of future years,
Is hanging breathless on thy fate!
Posted by Geoff on November 01, 2009 No comments: