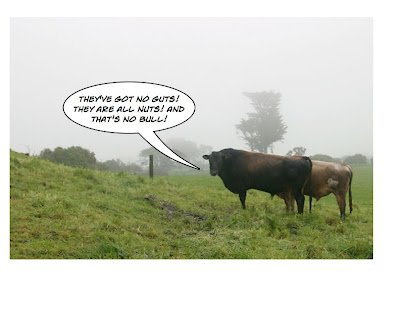 We have contacted the Farm Organisations and it appears that none of them seem interested in openly opposing the ETS.
Are these people stupid? Do they want to protect their constituents? Do they want their own positions to continue?

Why aren't these people actively fighting this crippling tax?

Why are opposition politicians actively opposing the ETS?

It will greatly increase the cost of living. And that's no bull! When the last farm has followed the last factory overseas will they then wake up?

And to draw a line under all this, the man who was to lend us a bull for our protest against the ETS on 13th August has now withdrawn for fear of his wife's job! And that's no bull!
Posted by Geoff on August 05, 2009