The great James Delingpole reveals how he became known to the world in a Spectator article.


I noticed an interesting story starting to break on the Watts Up With That? website.


It was the beginning of the Climategate revelations.

Climategate mattered because it offered the first solid proof that the scientific establishment wasn’t being altogether honest about man-made global warming. Up until that point, one or two of us had had our suspicions. But this was the breakthrough; the moment when the alarmists were caught red-handed with egg over their face and their trousers down.


It was the first solid proof that the scientific establishment wasn't being altogether honest about man-made global warming.

And it has continued unashamedly unabated.


The latest is the FAKE 11,000 "Scientist" Climate Emergency Scare.

As reported by "our ABC:"

More than 11,000 scientists around the world have signed a scientific paper declaring a climate emergency, backing protesters across the world demanding action.
The paper, published in the journal BioScience, declares the climate crisis "has arrived" and is "accelerating faster than most scientists expect".

As reported by the Alarmist Guardian:


The world’s people face “untold suffering due to the climate crisis” unless there are major transformations to global society, according to a stark warning from more than 11,000 scientists.
“We declare clearly and unequivocally that planet Earth is facing a climate emergency,” it states.

And from a previously respected phys.org


Today, more than 11,000 scientists have co-signed a letter in the journal BioScience, calling for urgently necessary action on climate.
This is the largest number of scientists to explicitly support a publication calling for climate action. They come from many different fields, reflecting the harm our changing climate is doing to every part of the natural world.

Note that each of these media (all known to push climate alarm) included the words "11,000 Scientists.

Did these organisations check whether there REALLY were 11,000 scientists?

If they had, they would have discovered some strange "scientists."

Dozens of signatories including Mickey Mouse and Harry Potter headmaster Albus Dumbledore from Hogwarts have been ­removed from an Alliance of World Scientists declaration of a “climate emergency”.
Access to the 11,000 name-petition that accompanied a statement of concern published in BioScience on Tuesday was blocked on Thursday.

Anthony Watts, on his site, added this Cartoon by Josh: 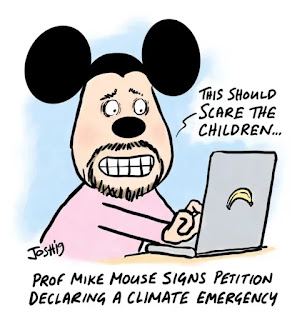 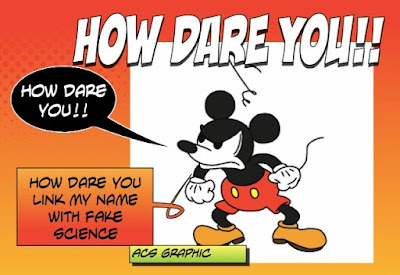 
Here are the Canadian non "scientists" as revealed by Ezra Levant: