Gee, the alarmists keep telling us, using manipulated data, that the global warming hiatus has not occurred.

Perhaps they should consult with their Chinese scientists.

•
Warming-induced drought caused a decline in Qinghai spruce growth in 1980–2001.
•
There was a clear increase in tree growth during the warming hiatus in 2001–2015.

So, the question is: 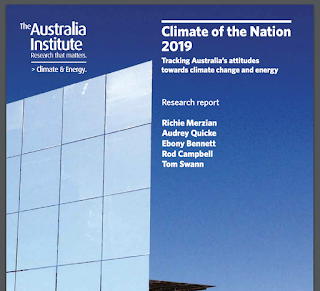 The Australia Institute does not rely on science. See their report (link)

So, here is a revelation.

In their latest report: Climate of the Nation: 2019 (link) they are relying on survey results. They are NOT looking at science!

REPEAT: They are not looking at science!

So, what does their survey show?

Who/What is to blame for rising Electricity Prices?


Any fool would know that it is subsidies to unreliable renewables. But what did they find? 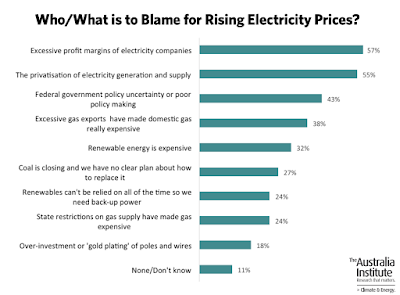 Gee, the top topic was excessive profits from electricity companies (57%) and privitisation of electrical companies.

AND can we remember WHO privitised the electrical companies?

But let's look further into those statistics:

One third of the people polled (surprisingly only one third were aware) stated the truth that:
Renewable Energy is expensive.

The subsidies on RENEWABLES make it VERY EXPENSIVE,

The poll also revealed the truth the, if we close the base power COAL GENERATORS we have no clear plan about how to replace it. And as 24% (really, only 24%?) said:

Renewables can't be relied on - we need back up power.

Gee, at least one quarter of the population realise the dilemma we face.

Why is the Australian Government bowing to the ratbags who believe (believe=faith - therefore not science) in the fraudulent man-made global warming bs?

As an afterword (or should that be a backword?) they also include this graph on the statement:

I think that Climate Change is occurring?

This got a rating of 77%. Any scientist and most climate change sceptics would have rated this question at 100% since climate has been changing since the beginning of time.

And those alarmists call US climate change deniers.