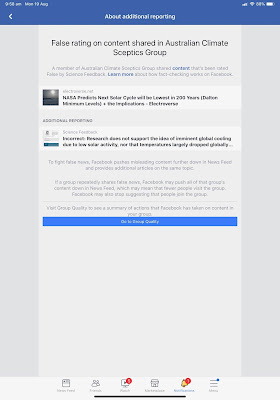 As many will know, Australian Climate Sceptics runs a FaceBook page in support of this blog.

Mick Garcia is a major contributor to the Australian Climate Sceptics FaceBook page.

Recently, the people at Facebook have been ERASING pages  (see above) with the heading

There does not seem to be an avenue to dispute these Facebook claims of "False" writing.
Nor does anyone know who are the anonymous "science feedback" people.

Strange, non-scientific Facebook(FB) output. Surely, science is the discussion of ideas, not closing down an idea that you don't agree with.

I hope that the FB gurus trust NASA. I don't, but that is a different story. 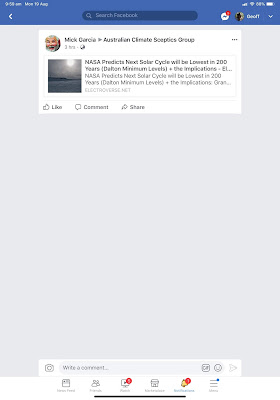 And I suppose the "science" FB feedback didn't know so dismissed the page ELECTROVERSE.NET but didn't go any further.

Or did you just remove it, without any chance of the page monitors to justify its inclusion?

The error that ELECTROVERSE made was not to include a link to the source.

The error that FACEBOOK made was not to check a link to the source. (LINK)

The Sun's activity rises and falls in an 11-year cycle. The forecast for the next solar cycle says it will be the weakest of the last 200 years. The maximum of this next cycle – measured in terms of sunspot number, a standard measure of solar activity level – could be 30 to 50% lower than the most recent one. The results show that the next cycle will start in 2020 and reach its maximum in 2025

Here's is the LINK, Facebook. Now, when are you going to, like REAL SCIENCE, allow your anonymous "science" gurus to be challenged?