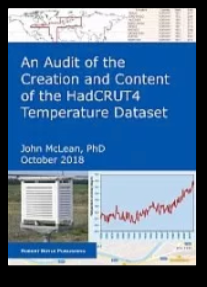 Now, John, writing a paper for his PhD,  has discovered MANY FLAWS in the data used by IPCC to substantiate man-made global warming.


according to a groundbreaking analysis by Australian researcher John McLean it’s far too sloppy to be taken seriously even by climate scientists, let alone a body as influential as the IPCC or by the governments of the world.

And look at the errors John discovered:
John's PhD paper can be procured for US$8 here - https://robert-boyle-publishing.com/product/audit-of-the-hadcrut4-global-temperature-dataset-mclean-2018/

Buy the paper and help one of our climate warriors.