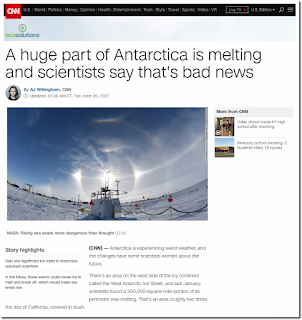 According to CNN, scientists say a huge part of Antarctica is melting.

Oh dear! What will we do?

Why not move Climate Refugees to melting Antarctica. 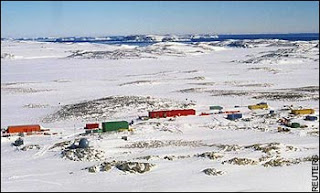 Climate change will force refugees to move to Antarctica by 2030, researchers have predicted.
Among future scenarios are the Olympics being held in cyberspace and central Australia being abandoned, according to the think tank report. (Tell 'em they're dreamin', son!)

Forum for the Future, a research body committed to sustainable development, said they wanted to stir debate about how to avert the worst effects of global warming by presenting a radical set of 'possible futures'. (Telegraph - LINK)

As Tony Heller (Deplorable Science Blog) points out, virtually the whole continent is below freezing.
How then could scientists say: "....a huge part of Antarctica is melting."

Do Scientist on the Public Purse Cheat?

Let's look at the start of the Global Warming Scare.

The fraud had its beginning in the Club of Rome and senior member Maurice Strong who said in the opening speech to the Rio Earth Summit 1992:

What if a small group of world leaders were to conclude that the principal risk to the Earth comes from the actions of the rich countries? And if the world is to survive, those rich countries would have to sign an agreement reducing their impact on the environment. Will they do it? The group's conclusion is 'no'. The rich countries won't do it. They won't change. So, in order to save the planet, the group decides: Isn't the only hope for the planet that the industrialized civilizations collapse? Isn't it our responsibility to bring that about?( Source Wikiquotes)


As revealed by the now-deleted First Global Revolution Report of the Club of Rome, they chose the threat of global warming as the common enemy against which they could unite.

Strong set up the bureaucratic structure to control the political and science agendas.

Then they set science on its head by defining climate change as: (link)

a change of climate which is attributed directly or indirectly human activity that alters the composition of the global atmosphere and which is in addition to natural climate variability observed over considerable time periods.

Carrying on the Fraud:

Since that notorious beginning, the frauding has continued; eg


A sorry story; unfortunately destroying the public’s trust in science.