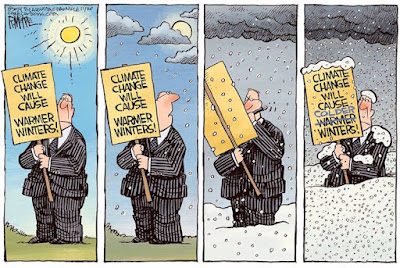 Robert Avery, writing for Scientific American, with a article entitled:

How to brainwash a so-called 'science-denier'

Scientific American Magazine was at one time an informative and objective publication.  But in recent times, it has begun turning into a leftist rag, part of the trend toward politicizing science.
Avery continues:


In a remarkable article, published online, a professor at Ohio State University [Professor Tsipursky] has spilled the beans on how you can be brainwashed—so as to, as he puts it, "update" your "beliefs."  Updating means to agree with his position on such so-called facts as global climate change.  You see, if you disagree with him, then you must be a "science denier."


It is important to understand how these KGB tactics, in concert with political pressure and the threat of lawsuits, are being used against you.  If you are a meteorologist, a certified weather scientist, then you are probably already aware that your very livelihood has been threatened, by means of revoking your license, unless you toe the party line concerning climate change socialism.  You see, according to the true believers, even a scientist can be a science denier.Nor is the coercion limited to scientists.  Non-scientists can be subjected to ridicule, ostracism, and even lawsuits.

And on the alarmists' frequently used term: "denier..."


One should understand that the term "science-denier" is not innocuous.  It is a slander, by subtle association with the term "Holocaust-denier."  In other words, if you use scientific data to contradict the claims of climate socialists, then you are in the same category as Nazi sympathizers.  The use of that term, "denier," in the title of Tsipursky's article is accusatory, and it reveals the arrogance and judgmental character of the left that prohibit fair debate.


As an aside, what once began as "global cooling" and then flip-flopped into "global warming" has finally been transformed into the equivocal term "climate change," just to prevent further embarrassment when the data (as they will) contradict the socialists.

So where the alarmists going wrong (or deliberately destructing the data?)


Here is proof that the sun controls climate:

Here are about 800 peer reviewed papers that show you are wrong:http://notrickszone.com/2017/04/03/growing-skepticism-already-150-new-2017-scientific-papers-support-a-skeptical-position-on-climate-alarm/#sthash.FQuYLxYX.CO3QmNGr.dpbs

Here is a debunk of New York Times lies: https://wattsupwiththat.com/2017/03/18/response-to-the-new-york-times-primer-on-climate-change-short-answers-to-hard-questions-about-climate-change/


The Eco nuts lied to us:
* Polar bears were NEVER endangered.
* The predicted increase in hurricanes never happened--https://wattsupwiththat.com/2017/04/06/hey-algore-explain-this-bottom-drops-out-of-us-hurricanes-in-past-decade/

* Hurricanes are not related to climate--https://wattsupwiththat.com/2017/04/05/global-warming-and-hurricanes-noaa-says-no-measurable-effect-yet/

* tornados are not caused by warming -- https://wattsupwiththat.com/2017/03/20/lack-of-correlation-between-tornadoes-and-temperature-increase-in-the-usa/

* recent cold is NOT unusual--https://wattsupwiththat.com/2017/03/19/the-300th-anniversary-of-the-great-colonial-snowcover-of-1717/
* Renewables can save money and replace carbon based energy